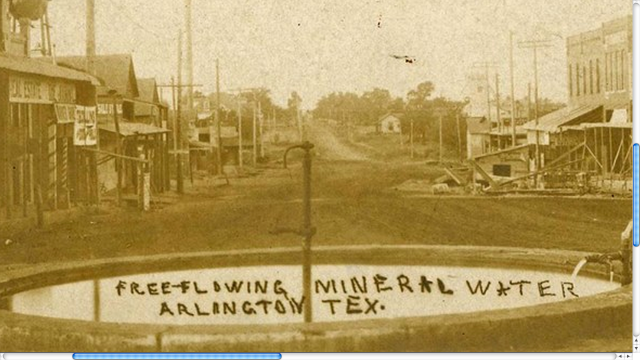 update here is a link  http://solutions.terracon.com/arlington/content/Home.aspx to find our where your nearest Arlington TX Brownsfund site is.
In 1893 a mineral well was drilled at the intersection of Main and Center Street in Arlington TX.
The underground well that once flowed the “healing” mineral waters by the old Vandergriff building back in old Arlington’s day can be a risk as a conduit for either the Truman drillsite by the Cowboy Stadium, the other three Division Street drill sites, or the UTA drill site. Reading the State Impact stories below got me thinking about that old Arlington well under the busy street a few blocks away from me…..
At the end of August 2012, Chesapeake fracked 3 wells at the corner of Collins and Division and have yet to flow that back! To make matters worse, on August 7, 2012, City Council approved an ordinance prohibiting the use of and contact with MSD * designated groundwater at the corner of East St and Division St because of ground pollution from an old gasoline station which is only one block away from the Truman/Cowboy Stadium drill site which is at least a few blocks away from this old mineral water well.
UPDATE ON 12/4/2012 YET ANOTHER MSD DESIGNATED (page 209) GROUNDWATER USE RESTRICTION-THIS TIME NEAR THE GASWELLS ON GM’S PADSITE…guess what they found in illegal amounts?…..
A R S E N I C  AND  M T B E …(yes those are known drilling effulents). My PIR with GM shows as of 2009-2011 arsenic and MTBE is not one of their pollutants being reported-however there is an unsettled matter of  VOC-unclassified that they exceeded how much they could report in “that” catagory in the last two years”…I have to get an attorney general’s opinion as to if that is a trade secret..”oh come the frack on”.
It is very unsettling for my family to be drinking municipal water and for my pipes to be in the ground close to all this contamination. I worry about what fracking is stirring up “down there”. Just the surface equipment used in fracking has been known to crack cement foundations at the Lynn Smith drill site in Arlington.
One of our council women replied on an email as to the shut in status of an old mineral water well, but it turns our she was incorrect in saying it was active……………
“The Old Arlington Mineral Well is alive and operating on the outdoor plaza at George Hawkes Library downtown. Original well was located at Main & Center. In 1976 as the construction of city hall and library were underway, the well water was piped to the library site and available to anyone who provided their own container by turning the facet. A few years ago, the facet was replaced by a traditional water fountain. You can taste the minerals in water.”
Lana Wolff, Council Member
Arlington TX District 5———————–
UPDATE>>>>>>as of Dec 2012, we still have no accountability of who or how good they plugged the ole city mineral well.
—– Forwarded Message —-
From: City of Arlington – Open Records <arlingtontx@mycusthelp.com>
To: kimfeil@sbcglobal.net
Sent: Wed, October 17, 2012 1:53:54 PM
Subject: Open Records Center Update :: W009309-101012

Dear Feil Kim, Your public information you requested:The mineral water well located near the Central Library at 101 W. Abram Street has not been in service since 1984.  The water fountain was disconnected at that time and converted to 100% Arlington Water Utilities potable water.  No blending of the potable water system and the mineral well occurs currently.

Our rules require that all oil and gas wells be properly plugged as per SWR 14.  Water wells not associated with oil and gas  activities are not under our jurisdiction.

The Railroad Commission of Texas does not regulate how close fracing can occur near old wells.

There has been an increase in stories ( State Impact story, another State Impact story and the most recent State Impact on the old Butters well story) circulating about old wells being conduits for shallow gas and water geisers made active by new gas well mining and just plain migration over time. Here is one of my favorites….
http://theadvocate.com/home/4074852-125/gas-trapped-near-sinkhole…..”The blast, on Jan. 17, 2001, stemmed from an old uncapped brine well forgotten inside the downtown store that once was part of a turn-of-the-20th century spa.
Seven miles away, propane had escaped, unknown, through a failed well casing tied to the Yaggy field salt storage cavern belonging to Oneok Inc., of Tulsa, Okla.
The propane moved through the underground Milan Limestone formation, which tilted upward from the cavern toward Hutchinson, a city of almost 41,000 then, until the gas found the old well.
An overhead furnace in the party store provided the ignition source, Forbes said. The explosion set fire to neighboring Woody’s Furniture Store, also part of the old spa.
The gas continued to move under the town, finding other old wells in an area once heavily solution-mined for salt, sparking a trailer fire that killed two people the next day and shooting geysers of water 100 feet high”
Here is more on that Hutchinson Kansas 2001 chain reaction explosions event… http://www.geotimes.org/oct01/feature_kansas.html
You can also read the 1985 Fairfax story and imagine that happening in Arlington…by the Cowboys Stadium downtown.
http://articles.latimes.com/1985-03-25/news/mn-21303_1_gas-explosion
……………………………………………..
*What is a Municipal Setting Designation?
http://www.tgpc.state.tx.us/subcommittees/POE/FAQs/MSD_FAQ.pdf
excepts ….”In 2003, the Texas Legislature passed a Municipal Setting Designation (MSD) statute which created a new alternative for persons addressing the groundwater contamination they were responsible for causing, as well as for persons who “volunteer” to address groundwater contamination. An MSD is an official state designation given to property within a municipality or its extraterritorial jurisdiction which certifies that designated groundwater at the property is not used as potable water. … Through this locally-controlled program, the prohibition against using the designated groundwater must either be in the form of a city ordinance or as a restrictive covenant that is enforceable by the city and filed in the property records. This law also limits investigation and remediation requirements for contaminated groundwater on MSD properties. By offering this alternative to address the problem of contaminated groundwater that will not be used as potable water, persons may be more inclined to develop and redevelop properties in municipal areas that have contaminated groundwater……”
———————–
Pantego TX gettn’ in on that MSD action too on agenda items 6 & 7 …..look at page 2 !!
http://www.townofpantego.com/DocumentCenter/Home/View/1193
Here is an excerpt….. “Council discussed agenda items 6 and 7 regarding the MSDs requested by Terracon Consultants. City of Arlington Deputy City Manager Bob Byrd came before Council to present Arlington’s position on MSDs. Mr Byrd stated that the City of Arlington feels that approving the MSDs are beneficial to economic development. He stated that the MSDs that have come before Arlington’s Council previously for approval have had exhaustive research performed on the ground in the vicinity of each location and each underground plume is well documented. The City of Arlington agrees that leaving pollution sitting underground is undeserible but they would rather see developed property than empty fields.“

Since TX Statute 253.005 forbids drilling in heavily settled municipalities, I unsuccessfully ran for City Council Seat to try to enforce this. Since Urban Drilling, our drinking water has almost tripled for TTHM's. Before moving to Arlington in 1990, I lived in Norco’s “cancer alley”, a refinery town. It was only after Urban Drilling in Arlington did I start having health effects. After our drill site was established closest to my home, the chronic nosebleeds started. I know there are more canaries here in Arlington having reactions to our industrialized airshed (we have 55-60 padsites of gas wells). Come forward and report to me those having health issues especially if you live to the north/northwest of a drill site so I can map your health effects on this blog. My youtube account is KimFeilGood. FAIR USE NOTICE: THIS SITE MAY CONTAIN COPYRIGHTED MATERIAL THE USE OF WHICH HAS NOT ALWAYS BEEN SPECIFICALLY AUTHORIZED BY THE COPYRIGHT OWNER. MATERIAL FROM DIVERSE AND SOMETIMES TEMPORARY SOURCES IS BEING MADE AVAILABLE IN A PERMANENT UNIFIED MANNER, AS PART OF AN EFFORT TO ADVANCE UNDERSTANDING OF THE SOCIAL JUSTICE ISSUES ASSOCIATED WITH EMINENT DOMAIN AND THE PRIVATIZATION OF PUBLIC INFRASTRUCTURE (AMONG OTHER THINGS). IT IS BELIEVED THAT THIS IS A 'FAIR USE' OF THE INFORMATION AS ALLOWED UNDER SECTION 107 OF THE US COPYRIGHT LAW. IN ACCORDANCE WITH TITLE 17 USC SECTION 107, THE SITE IS MAINTAINED WITHOUT PROFIT FOR THOSE WHO ACCESS IT FOR RESEARCH AND EDUCATIONAL PURPOSES. FOR MORE INFORMATION, SEE: HTTP://WWW.LAW.CORNELL.EDU/ TO USE MATERIAL REPRODUCED ON THIS SITE FOR PURPOSES THAT GO BEYOND 'FAIR USE', PERMISSION IS REQUIRED FROM THE COPYRIGHT OWNER INDICATED WITH A NAME AND INTERNET LINK AT THE END OF EACH ITEM. (NOTE: THE TEXT OF THIS NOTICE WAS ALSO LIFTED FROM CORRIDORNEWS.BLOGSPOT.COM)
View all posts by Kim Triolo Feil →
This entry was posted in Uncategorized and tagged 1985, abram, artesian, Barnett, Bennett, boom, capehart, cavern, center, chain, cityofarlington, cluck, conduit, Conservation, contamination, corridor, council, cowboy, cracks, dallas, division, dome, drilling, explosion, fairfax, feil, fires, fountain, galespie, gas, geiser, hutchinson, Kim, kimfeilgood, main, methane, migration, mineral, natural, open, parker, propane, reaction, records, request, rivera, salt, shale, shepard, stadium, street, terracon, terriorists, trey, Uncategorized, UTA, UTArlington, vandergriff, Vision, Waters, well, wilemon, wolff, yelverton. Bookmark the permalink.