The RSOE report is here.

WFAA reported…”Veterinarian Bob Denton did an initial search for clues.

“The first thing I noticed on this bird is his liver is enlarged,” he said, examining a male grackle.

He said one bird had signs of sinus infection.

“The big thing you would worry about is toxins,” he said. “Or maybe a virus.”

What is common in these bird deaths in Arlington and Burleson is proximity to drill sites and an electric power substation. In the Burleson bird kill, there is also two large industrial storage tanks and a nearby air port too.

Below is the two Arlington bird die off stories that occurred in the same area within a three month timeframe. Sadly the Arlington ISD Schoolboard voted on even more land to build schools on in this highly toxic? area …..for birds. What will this area mean for the longterm health of the children? The newest school will open this August 2013  at 2220 E Sherry St.

First mass bird death in Arlington (that I am aware of) happened on November 25, 2012. Here is the video…

One hundred and ninety-eight black birds died near gas well site & substation from Parasites. Dr. Jani Hodges, performed an examination of one of the birds. The results, however, were inconclusive.

“Cause of death is considered to be pulmonary hemorrage associated with the parasite microfilaria within the blood vessels of the lung. The microfilaria resulted in ruptured capillaries and hemorrhage. Numerous species of filarial nematodes occur in birds. The species of this parasite cannot be identified. Stanley Vanhooser, DCM<MS<DACPV/pjt”

Look at this map and see what else the poor birds flew over that could have killed them since they showed no trauma from the power lines.  I think the vet should also look for methane asphyxiation. 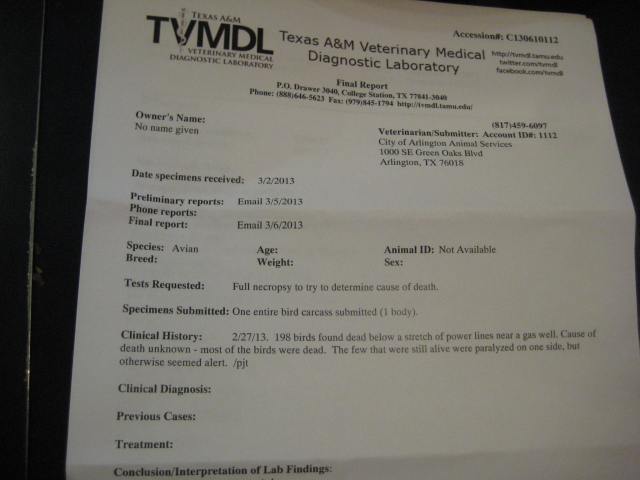 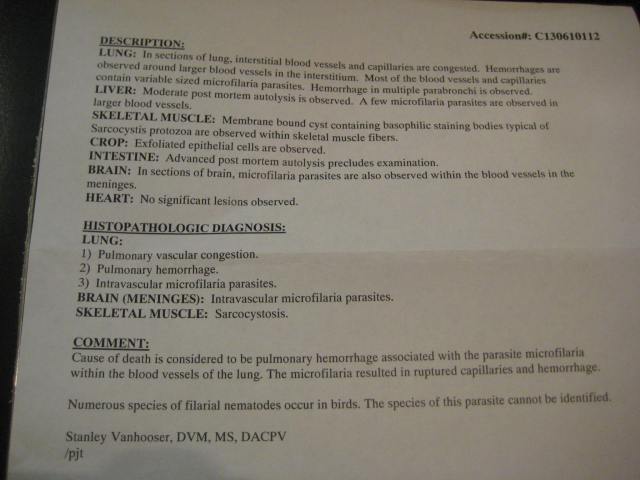 Hello, I did a PIR for your report, C130610112 on those dead birds in Arlington TX.
In the past, I was studying the Wilfong cattle deaths (in litagation now). And I also followed the case on the cattle deaths from Caddo parish Louisiana. While I realize those were/may have been associated with ingesting gas drilling related fluids after a rainstorm occurred just prior to both cattle’s deaths, I hoped to share with you some info that may be helpful in the bird case.
The Caddo cattle deaths were settled out of court for about $22,000 per head (17 cows died).

The (Caddo) report states that one cow tested suffered from severe pulmonary hemorrhage and edema. Witnesses to the cows’ deaths described them as bellowing and bleeding before falling over dead.

My question to you is if you were aware of not only there being an electric substation nearby, but if you were aware that the birds were also near a padsite of natural gas wells in production? Here is a map.
Those tanks give off invisible hydrocarbons or maybe even one of the well heads were experiencing an emission event that the birds might have been near…I hope this additional information will be helpful in understanding if parasites were normal in their bodies and maybe methane posioning, surfactants, methanol (used in maintaining the wells), MBTE, or BTEX could explain their deaths?
Here is a youtube video link of the LakeArlington Compressor Station emissions revealed through FLIR infrared imagery…..
http://www.youtube.com/watch?v=mBFRYpEs3sc&feature=player_embedded
Kim Feil

Since TX Statute 253.005 forbids drilling in heavily settled municipalities, I unsuccessfully ran for City Council Seat to try to enforce this. Since Urban Drilling, our drinking water has almost tripled for TTHM's. Before moving to Arlington in 1990, I lived in Norco’s “cancer alley”, a refinery town. It was only after Urban Drilling in Arlington did I start having health effects. After our drill site was established closest to my home, the chronic nosebleeds started. I know there are more canaries here in Arlington having reactions to our industrialized airshed (we have 55-60 padsites of gas wells). Come forward and report to me those having health issues especially if you live to the north/northwest of a drill site so I can map your health effects on this blog. My youtube account is KimFeilGood. FAIR USE NOTICE: THIS SITE MAY CONTAIN COPYRIGHTED MATERIAL THE USE OF WHICH HAS NOT ALWAYS BEEN SPECIFICALLY AUTHORIZED BY THE COPYRIGHT OWNER. MATERIAL FROM DIVERSE AND SOMETIMES TEMPORARY SOURCES IS BEING MADE AVAILABLE IN A PERMANENT UNIFIED MANNER, AS PART OF AN EFFORT TO ADVANCE UNDERSTANDING OF THE SOCIAL JUSTICE ISSUES ASSOCIATED WITH EMINENT DOMAIN AND THE PRIVATIZATION OF PUBLIC INFRASTRUCTURE (AMONG OTHER THINGS). IT IS BELIEVED THAT THIS IS A 'FAIR USE' OF THE INFORMATION AS ALLOWED UNDER SECTION 107 OF THE US COPYRIGHT LAW. IN ACCORDANCE WITH TITLE 17 USC SECTION 107, THE SITE IS MAINTAINED WITHOUT PROFIT FOR THOSE WHO ACCESS IT FOR RESEARCH AND EDUCATIONAL PURPOSES. FOR MORE INFORMATION, SEE: HTTP://WWW.LAW.CORNELL.EDU/ TO USE MATERIAL REPRODUCED ON THIS SITE FOR PURPOSES THAT GO BEYOND 'FAIR USE', PERMISSION IS REQUIRED FROM THE COPYRIGHT OWNER INDICATED WITH A NAME AND INTERNET LINK AT THE END OF EACH ITEM. (NOTE: THE TEXT OF THIS NOTICE WAS ALSO LIFTED FROM CORRIDORNEWS.BLOGSPOT.COM)
View all posts by Kim Triolo Feil →
This entry was posted in Uncategorized and tagged 303, alert, arlington, asphyxiation, bird, birds, black, burleson, capillaries, cityofarlington, congested, gas, hemmorage, microfilaria, nematodes, paralyzed, parasite, parasites, pioneer, ruptured, sarcocystis, site, substation, tx, Uncategorized, well. Bookmark the permalink.