Dec 2014 update…our City Attorney went to work for an energy related company and our Deputy City Manager retired after being with the city for only two years….hmmnnn. It must be hard for city employees to work for an urban drilling town where public health and safety isn’t taken seriously cause the Precautionary Principle is second to royalties.

Nov. 2014 update…Rusty Ward now works for EnerVest-he previously worked for Carrizo after he got UTA to start drilling on their campus while he worked at UTA as VP of Business Affairs. Recently Rusty saw to it that I was asked to leave a community meeting for the Fannin Farms drill site…they said it was for those within 600 ft and the compensation wasn’t to be made public. I said that I was an airshed stakeholder and other neighbors over 600 feet away were stakeholders too. I said it was immoral to put a price tag on other innocent people’s airshed. I said I wanted to know the going price to pollute a neighborhood.

Staples will step aside as Agriculture Commissioner for private sector Agriculture Commissioner Todd Staples (pictured) Thursday confirmed rumors that he would step aside from his statewide elected office to lead the Texas Oil and Gas Association as its next president. Staples is expected to leave the agency he has served as commissioner since 2006 within the next two months. He will take over the lead role at the association in January.

Todd Staples‘ job move from Ag Commissioner to TOGA president (mentioned above) is at the same level of hypocrisy as the Texas Farm Bureau lead, Kenneth Dierschke, is.

Watch Kenneth complain in a EPA bashing congressional hearing where he comments on how “the EPA wants to keep the cows away from contaminated water”…at 1:08:08 into this video…

In that hearing, Kenneth and Bud Weinstein (an SMU Economist) are witnesses…and Weinstein is called out for his conflict of interest….hah!

Locally over the years I recall the Ft Worth Gas Well environmental guy..whats his name..?… going to work for Chesapeake…just like our Tony Rutigliano  was an assistant to the mayor in Arlington and went to work for Chesapeake presenting gas well cases before council. Then before the big Chesapeake layoffs began, Tony went to work as CEO for the The Downtown Arlington Management Corporation. He gets his salary from this private, non-profit community development organization funded through a taxing program imposed from the Downtown Business Improvement District and subsequent district tax, which began Oct. 1 in 2010. “The tax will provide additional resources to continue the development of areas within the boundaries of Cooper and Collins streets and North and Second streets”. Ironically Tony presented the Truman drill site for council’s approval on North St at Truman which is 2,500 feet from the ATT Stadium…nice work.

Now we’ve had folks at the RRC and the TCEQ go to work for the industry…Michael O’Quinn left the RRC to work in the industry to work for Crain Energy.…feel free to comment and I’ll add info….

Jessica Minley, a City of Arlington Gas Well Specialist, came from the TCEQ….but alas she didn’t find any TCEQ violation when her TVA found 1,140,000 ppb VOC’s near my son’s school during a nitro lift, nor did she find a City of Arlington nuisance violation in the Entertainment District during the Chesapeake “stank event” even though her own field notes say that it was. 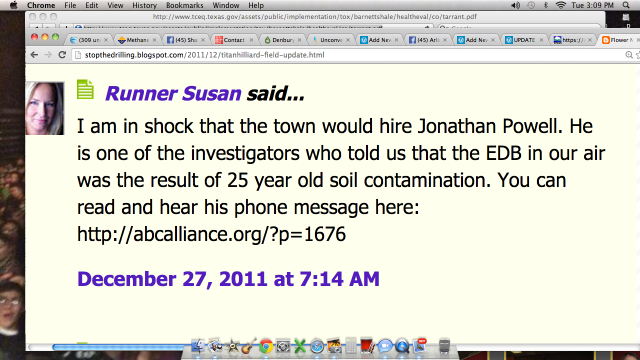 Michael Williams (degreed in law) to the lead the Texas Education Agency, and….

I do agree with Governor Perry in having appointed Carlos (a good guy) Rubinstein (formerly with the TCEQ) as chairman of the Texas Water Development board (TWDB). This man worked his way up the ranks and actually voted down an injection well citing water contamination risk.

Elizabeth Ames Jones was added to the Railroad Commission to oversee the Oil & Gas industry when she earned a bachelors degree in Journalism…..imagine that?

But alas Kathleen Hartnett White (see her rant below) & Elizabeth both have their daddies to thank for their success because they both come from a lineage of cattle and oil. In Texas thats ‘snuff to get U an incestuous job.

Prior to that she “served on the Texas Water Development Board, the Texas Economic Development Commission and the Environmental Flows Study Commission. Kathleen now is an officer and a director of the Lower Colorado River Authority – her fifth gubernatorial appointment.”

Here are Kathleen White’s comments below in italics on CO2 = Life  ….

This morning while tuning in to hear an Arlington reporter speak on the upcoming Urban Shield exercise on the Mark Davis Show, later Mr Davis interviewed Kathleen White on why the EPA is taking public comment on setting rules to reduce CO2 on existing power plants. Right out of the gate they both agreed that CO2 = Life (*why regulate it?) and so I decided to find out why “she” was chosen to be interviewed on the Mark Davis Show regarding this hearing. I was NOT surprised to find out she did NOT have a background in Environmental Science.

I will now state that this is my opinion of this woman and I will plead for protection under the Texas Anti Slapp Suit law in the event I ruffle her precious, rich-ass feathers.

I highly encourage you to read the comments on this too.

She boldly states…  “Emissions of VOCs from Barnett Shale production are increasingly a non-problem. Most of the natural gas in the Barnett Shale formation is what geologists call “dry gas.” With little to zero associated liquids, VOCs are unlikely to be emitted from most dry gas wells.”  But I laugh with a hearty “HA HA HA” as I myself who also have no degree in environmental science challenge her to tell me what is coming off of these storage -stanks-  in this TCEQ generated video of infrared captured emissions at the Lake Arlington Pipeline Compressor Station. BTW this video is the same facility that she bashes the work of one of the scientists in this article.

I also challenge White who says our Barnett Shale gas is unlikely to have (harmful?) liquids when a citizen funded air test failed for Benzene and Napthlene here in nearby Colleyville TX.

In addition to bashing scientists, she proudly displays her Manmade Climate Change Denialism in yet another article of her own nonscientific work explaining how CO2 isn’t DIRECTLY harmful to breathe and how laws aren’t important if they don’t pertain to the “here and now”. She wrote …“Ambient refers to the air humans breathe—what surrounds us now at ground levels, not atmospheric accumulations 30 to 50 years in the future as predicted by the official science of the United Nations’ Intergovernmental Panel on Climate Change.”

In this same article, http://www.texaspolicy.com/center/energy-environment/opinions/are-texas-power-plants-cleanest-or-dirtiest, she trys to paint the picture that Texas’ huge share of the United States overall pollution is cleaner relative to the jobs this pollution creates……..

“Natural processes create about 200 billion tons of CO2 per year. Man-made CO2 emissions may generate about 7 billion tons. Have we forgotten that CO2 is a ubiquitous component of the natural process photosynthesis, on which all life depends?”

So I ask Ms White, if man contriubtes <4% of CO2, shouldn’t we give up on regulating CO2 and instead focus on all the fracking related Methane losses since CH4 speeds up global warming?*  Oh wait…TCEQ doesn’t even test for Methane on their ambient monitors and suma canisters.
So how much Methane is in our URBAN DRILLING CESSPOOL AIRSHED?….
Well when Ft Worth had ERG do that one million dollar air test, they said our ambient Methane levels were at  5-10 ppm methane when the world wide background average is 2 ppm……nice work Perry…your NON-SCIENTIST appointees are apparently adept at wasting away our natural resources “and” our health & environment for …jobs….
Perry related commerce is at the expense of having an inhabitable planet for our children’s future.
C02 & CH4 = jobs NOT LIFE!
Earth to Perry and his piss ant appointees….Renewable Energy Sources = Jobs AND Life
*No we don’t give up on controlling the manmade portion of CO2 because THAT amount is what nature cannot handle…..‘The Earth has a natural CO2 cycle that moves massive amounts of CO2 into and out of the atmosphere. The oceans and land vegetation release and absorb over 200 billion metric tons of carbon into and out of the atmosphere each year. When the cycle is balanced, atmospheric levels of CO2 remain relatively stable. Human activities are now adding about 7 billion metric tons of carbon into the atmosphere every year, which is only about 3-4% of the amount exchanged naturally. But that’s enough to knock the system out of balance, surpassing nature’s ability to take our CO2 emissions out of the atmosphere. The oceans and land vegetation are absorbing about half of our emissions; the other half remains airborne for 100 years or longer. This is what is causing the rapid buildup of CO2, a buildup that dwarfs natural fluctuations.’

Since TX Statute 253.005 forbids drilling in heavily settled municipalities, I unsuccessfully ran for City Council Seat to try to enforce this. Since Urban Drilling, our drinking water has almost tripled for TTHM's. Before moving to Arlington in 1990, I lived in Norco’s “cancer alley”, a refinery town. It was only after Urban Drilling in Arlington did I start having health effects. After our drill site was established closest to my home, the chronic nosebleeds started. I know there are more canaries here in Arlington having reactions to our industrialized airshed (we have 55-60 padsites of gas wells). Come forward and report to me those having health issues especially if you live to the north/northwest of a drill site so I can map your health effects on this blog. My youtube account is KimFeilGood. FAIR USE NOTICE: THIS SITE MAY CONTAIN COPYRIGHTED MATERIAL THE USE OF WHICH HAS NOT ALWAYS BEEN SPECIFICALLY AUTHORIZED BY THE COPYRIGHT OWNER. MATERIAL FROM DIVERSE AND SOMETIMES TEMPORARY SOURCES IS BEING MADE AVAILABLE IN A PERMANENT UNIFIED MANNER, AS PART OF AN EFFORT TO ADVANCE UNDERSTANDING OF THE SOCIAL JUSTICE ISSUES ASSOCIATED WITH EMINENT DOMAIN AND THE PRIVATIZATION OF PUBLIC INFRASTRUCTURE (AMONG OTHER THINGS). IT IS BELIEVED THAT THIS IS A 'FAIR USE' OF THE INFORMATION AS ALLOWED UNDER SECTION 107 OF THE US COPYRIGHT LAW. IN ACCORDANCE WITH TITLE 17 USC SECTION 107, THE SITE IS MAINTAINED WITHOUT PROFIT FOR THOSE WHO ACCESS IT FOR RESEARCH AND EDUCATIONAL PURPOSES. FOR MORE INFORMATION, SEE: HTTP://WWW.LAW.CORNELL.EDU/ TO USE MATERIAL REPRODUCED ON THIS SITE FOR PURPOSES THAT GO BEYOND 'FAIR USE', PERMISSION IS REQUIRED FROM THE COPYRIGHT OWNER INDICATED WITH A NAME AND INTERNET LINK AT THE END OF EACH ITEM. (NOTE: THE TEXT OF THIS NOTICE WAS ALSO LIFTED FROM CORRIDORNEWS.BLOGSPOT.COM)
View all posts by Kim Triolo Feil →
This entry was posted in don jakeway and tagged access midstream, ames, arlington, benzene, brian, brian Borner, Co2, CO2 = Life, CO2=Life, comments, compressor, dallas, darren groth, davis, don jakeway, elizabeth, epa, father, grand, harc, hartnett, incest, jay doegey, jones, kathleen, kijun hong, lake, life, listening, lyman, mark, mark davis show, methane, michael, pipeline, plants, powell, power, public, report, rrc, rusty ward, scholarship, scients, shaw, show, smith, staples, station, TCEQ, todd, tony rutigliano, tpp, tppf, Wheeler, white, williams. Bookmark the permalink.