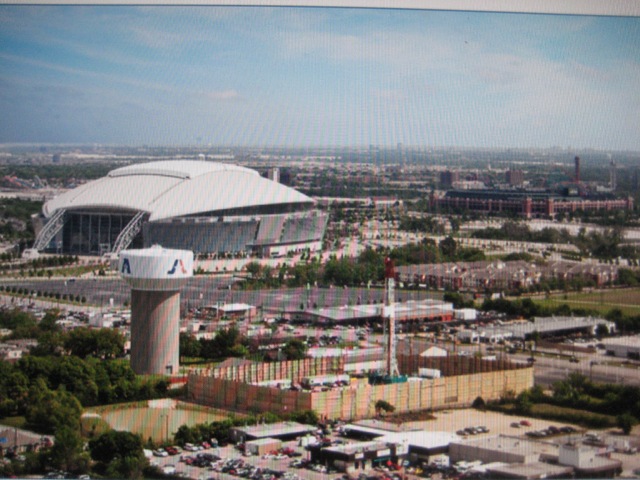 So is it logical to ponder that shale gas leaks can cause toxic and or explosive levels in Arlington TX downtown where urban drilling has taken place near our old historic mineral water well?  Migration happens and we do have such a conduit like our old artesian famous mineral water well. We also have about 300 private water wells within a 3-5 mile radius of my home by the Cowboy’s Stadium. But in the France story below, there is no mention of a water well, only that Radon was detected “..in the basement and other areas of the property”.  And in the Germany Benzene cancer cluster story, the gas was coming up through the soil.

The fracking craze here in the last 7 years (and 350 urban gas wells later) could be the opening of Pandoras box to go BOOM at the most inopportune time in our busy downtown, college, and Entertainment District..or in the homes of unsuspecting, innocent Arlington residents or AISD students and staff. “Oh the humanity of it all”-note sarcasm.

My pleas thus far have fallen on the deaf ears of our city leadership…hope deaf doesn’t = death one day…this is the reason I copy my emails to the internet…E V I D E N C E of forewarning those in charge of our safety and well being to use home rule to stop the drill sites and plug the gas wells that do not belong in residential or business or light industrial areas P E R I O D !

“A family have been evacuated from their Limousin home after it was discovered large doses of the radioactive gas radon were present in the property. The property, in Bessines-sur-Gartempe (Haute Vienne), north of Limoges had since 2000 been used as a home-care facility for 20 children from six families in the area. The regional health agency said in a statement that the area is rich in uranium ore and has been mined for decades, and added that government departments had been informed, France 3 revealed in a local news report. A check discovered the presence of “abnormal amount” of radon gas in the basement and other areas of the property. Radon is easily diluted in outdoor air but “may present risks to health”. The level of radon gas has not been revealed, but it is said to have been “significantly higher than the maximum values” detected elsewhere in the region.”

Since TX Statute 253.005 forbids drilling in heavily settled municipalities, I unsuccessfully ran for City Council Seat to try to enforce this. Since Urban Drilling, our drinking water has almost tripled for TTHM's. Before moving to Arlington in 1990, I lived in Norco’s “cancer alley”, a refinery town. It was only after Urban Drilling in Arlington did I start having health effects. After our drill site was established closest to my home, the chronic nosebleeds started. I know there are more canaries here in Arlington having reactions to our industrialized airshed (we have 55-60 padsites of gas wells). Come forward and report to me those having health issues especially if you live to the north/northwest of a drill site so I can map your health effects on this blog. My youtube account is KimFeilGood. FAIR USE NOTICE: THIS SITE MAY CONTAIN COPYRIGHTED MATERIAL THE USE OF WHICH HAS NOT ALWAYS BEEN SPECIFICALLY AUTHORIZED BY THE COPYRIGHT OWNER. MATERIAL FROM DIVERSE AND SOMETIMES TEMPORARY SOURCES IS BEING MADE AVAILABLE IN A PERMANENT UNIFIED MANNER, AS PART OF AN EFFORT TO ADVANCE UNDERSTANDING OF THE SOCIAL JUSTICE ISSUES ASSOCIATED WITH EMINENT DOMAIN AND THE PRIVATIZATION OF PUBLIC INFRASTRUCTURE (AMONG OTHER THINGS). IT IS BELIEVED THAT THIS IS A 'FAIR USE' OF THE INFORMATION AS ALLOWED UNDER SECTION 107 OF THE US COPYRIGHT LAW. IN ACCORDANCE WITH TITLE 17 USC SECTION 107, THE SITE IS MAINTAINED WITHOUT PROFIT FOR THOSE WHO ACCESS IT FOR RESEARCH AND EDUCATIONAL PURPOSES. FOR MORE INFORMATION, SEE: HTTP://WWW.LAW.CORNELL.EDU/ TO USE MATERIAL REPRODUCED ON THIS SITE FOR PURPOSES THAT GO BEYOND 'FAIR USE', PERMISSION IS REQUIRED FROM THE COPYRIGHT OWNER INDICATED WITH A NAME AND INTERNET LINK AT THE END OF EACH ITEM. (NOTE: THE TEXT OF THIS NOTICE WAS ALSO LIFTED FROM CORRIDORNEWS.BLOGSPOT.COM)
View all posts by Kim Triolo Feil →
This entry was posted in Uncategorized and tagged arlingont residents, arlington, artesian, att, Barnett, cityofarlington, college, deep, district, downtown, drilling, entertainment, evacuations, evidence, explosion, explosive, final four, flags, forewarning, fraccking, france, gas, General Motors, globe, globelife, globelife park, GM, health, home, homeland, kimfeilgood, leaders, leadership, leak, leaks, life, mass, migration, mined, mineral, mineral water well, ore, park, previously, radioactive, radon, ranger, risk, rule, security, shale, shallow, six, stadium, terror, terrorism, threat, toxic, Uncategorized, uranium, urban, UTArlington, water, well. Bookmark the permalink.