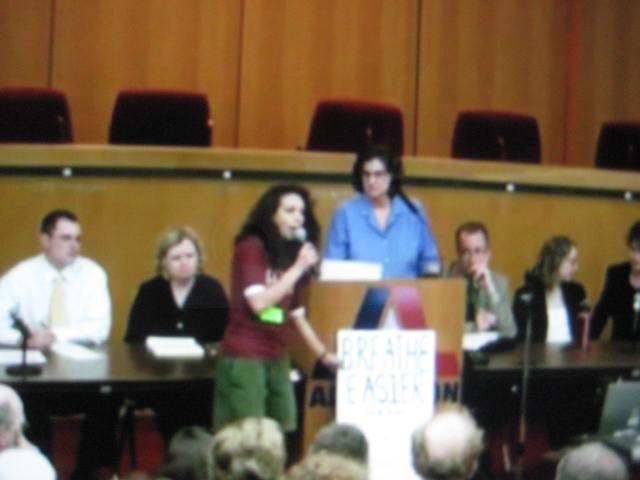 Kim Feil (me) speaking at a public TCEQ hearing-falling on deaf ears-they don’t read their own literature!

A Duke professor reported that chloride, bromide, sodium, manganese, strontium and barium have been found in Wolf Creek  that may be linked to migration from a nearby waste water injection well in Virginia.  These are chemicals linked to fracking wastewater and have been ruled out as having been sourced from any previous acid mine drainage contamination.

—(I boldfaced for emphasis)

“Since the 1920s, oil and gas exploration has been a major industry in the counties of West Texas. In 1998, the combined total production from oil fields in Mitchell, Scurry, and Howard Counties was 17,917,877 barrels (TCEQ, 2003). The oil extraction process creates brine, and when the ratio of salt water to oil increases, the well becomes unprofitable and is, in most cases, abandoned. Many abandoned wells develop cracks and leaks that can eventually contaminate groundwater and surface water (TCEQ, 2003).

From the 1920s through 1969, brine disposal pits were utilized to dispose of the brine that accompanies oil production. These disposal sites consisted of large, shallow, unlined pits where water was disposed of by evaporation and seepage (TCEQ, 2003). However, when brine evaporated from these pits, salts were left behind that eventually infiltrated the shallow subsurface and local groundwater. When brine disposal pits were banned in 1969, oil companies began to inject brine into the subsurface strata to dispose of the excess salt water and to recover oil deposits from under-pressurized geologic formations (TCEQ, 2003).

As technology has improved and the costs of injection have decreased, the volume of brine injected into these wells has increased. In many cases, the geologic formations that are utilized for brine injection are located beneath shallow aquifers (TCEQ, 2003).

Groundwater can become contaminated from salt water migration or within the injection well itself, and surface water bodies can be affected where these formations outcrop. Contamination from injection wells has usually been attributed to cracked casings, leaking boreholes, or wells that have not been operated properly (TCEQ, 2003).”

I have contacted Freese and Nichols, Inc for footnote info on the (TCEQ 2003) statements and will update this if they respond.

Since TX Statute 253.005 forbids drilling in heavily settled municipalities, I unsuccessfully ran for City Council Seat to try to enforce this. Since Urban Drilling, our drinking water has almost tripled for TTHM's. Before moving to Arlington in 1990, I lived in Norco’s “cancer alley”, a refinery town. It was only after Urban Drilling in Arlington did I start having health effects. After our drill site was established closest to my home, the chronic nosebleeds started. I know there are more canaries here in Arlington having reactions to our industrialized airshed (we have 55-60 padsites of gas wells). Come forward and report to me those having health issues especially if you live to the north/northwest of a drill site so I can map your health effects on this blog. My youtube account is KimFeilGood. FAIR USE NOTICE: THIS SITE MAY CONTAIN COPYRIGHTED MATERIAL THE USE OF WHICH HAS NOT ALWAYS BEEN SPECIFICALLY AUTHORIZED BY THE COPYRIGHT OWNER. MATERIAL FROM DIVERSE AND SOMETIMES TEMPORARY SOURCES IS BEING MADE AVAILABLE IN A PERMANENT UNIFIED MANNER, AS PART OF AN EFFORT TO ADVANCE UNDERSTANDING OF THE SOCIAL JUSTICE ISSUES ASSOCIATED WITH EMINENT DOMAIN AND THE PRIVATIZATION OF PUBLIC INFRASTRUCTURE (AMONG OTHER THINGS). IT IS BELIEVED THAT THIS IS A 'FAIR USE' OF THE INFORMATION AS ALLOWED UNDER SECTION 107 OF THE US COPYRIGHT LAW. IN ACCORDANCE WITH TITLE 17 USC SECTION 107, THE SITE IS MAINTAINED WITHOUT PROFIT FOR THOSE WHO ACCESS IT FOR RESEARCH AND EDUCATIONAL PURPOSES. FOR MORE INFORMATION, SEE: HTTP://WWW.LAW.CORNELL.EDU/ TO USE MATERIAL REPRODUCED ON THIS SITE FOR PURPOSES THAT GO BEYOND 'FAIR USE', PERMISSION IS REQUIRED FROM THE COPYRIGHT OWNER INDICATED WITH A NAME AND INTERNET LINK AT THE END OF EACH ITEM. (NOTE: THE TEXT OF THIS NOTICE WAS ALSO LIFTED FROM CORRIDORNEWS.BLOGSPOT.COM)
View all posts by Kim Triolo Feil →
This entry was posted in Uncategorized and tagged admittance, australian, “Radioactive Wastes from Oil and Gas Drill- ing, barium, brine, bromide, chloride, cityofarlington, contamination, duke, freese and nichols, injection, leaks, manganese, migration, pits, sodium, spills, Strontium, TCEQ, Uncategorized, virgin, Virginia, waste, water, wells. Bookmark the permalink.