A frack site at 2365 S Jennings St. is ONE THOUSAND FEET from an EPA designated Cadmium and Nickel superfund site at 2301 S Main St in Ft Worth TX …. suprised?http://www.epa.gov/earth1r6/6sf/pdffiles/pesses-tx.pdf

map pic taken July 2014 Frack Pool I have blogged about before holds millions of gallons of water and the sheer weight of that could cause ground movement in my opinion. 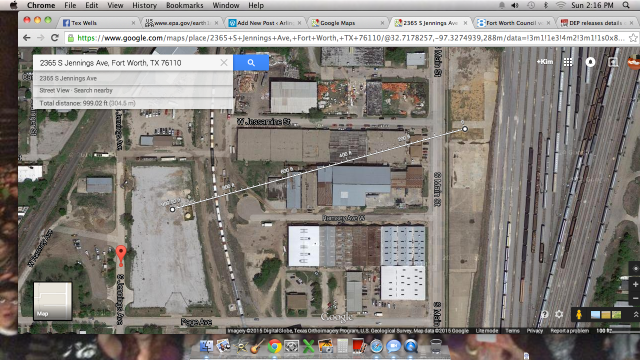 1,000 surface feet separates the Jennings frack site from the Cadmium superfund site!…gee I wonder how close then the laterals run underneath the ground to the superfund site?

Dale Henry, a retired Petrolem Engineer, said fracking is more seismic taunting than injection wells-see video.  Frackquakes near this superfund site could possibly get that Cadmium moving into fractures and then into the Paluxy (more shallow) ground water which is part of Ft Worth’s drinking supplies.

Reports state that injection wells are to be credited with seismic frackquakes. One ballzie Ft Worth councilman wanted to have an exception to the Ft Worth injection well moratorium. He wanted to allow an injection well in the Hillwood Alliance industrial area to provide relief to roads being damaged by all the ‘truck fracking traffic’ hauling heavy ass water to injection wells to the unincorporated (unprotected) areas in north Ft Worth. But the WFAA news heading was updated and reads …

Here is a link to Chesapeake’s injection well info for the Barnett Shale area.

Back in 2012 the City of Ft Worth weighed the pros and cons of inner city injection wells. I have blogged about the Brentwood inner city injection well that also did (does?) a Chesapeake pilot program (2008) to use the waste heat from the compressors to evaporate the waste water piped in from other nearby padsites. I have had issues in them NOT USING SCRUBBERS to evaporate that toxic waste water. I recall then Senator Davis speaking at an energy hearing concerned that polyethylene piping moving produced water is not regulated. I’m not sure if the piping was ever completed with the nearby padsites and I’m not sure if the evaporation units are still at that Brentwood location or not. 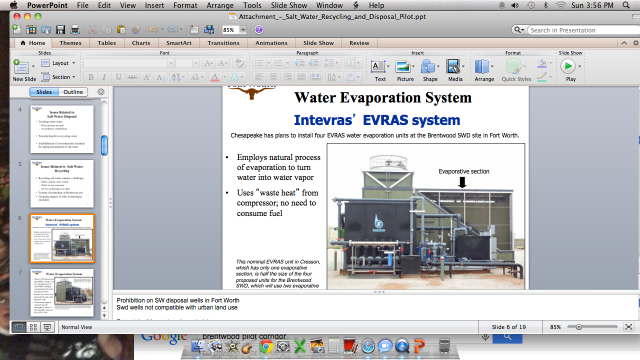 So where is this Brentwood site that is a combination of gas well pad site/compressor station/Salt Water Injection well /evaporation site? It is located on East First St next to the old Arc Park in Ft Worth. 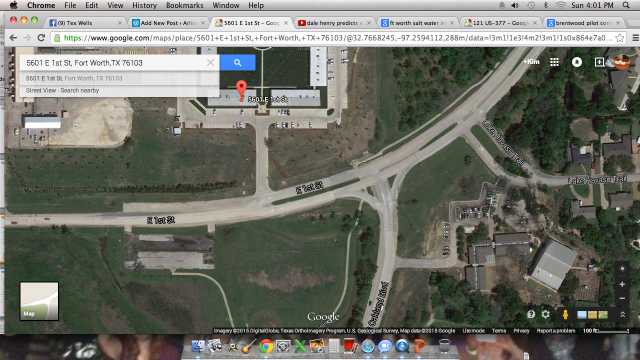 The Brentwood INJECTION WELL site is five miles from the Cadmium superfund site…. 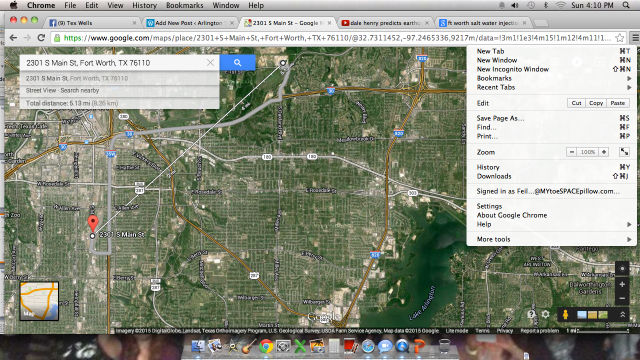 …and the Cadmium superfund site is 5.6 miles from our drinking water holding source at Lake Arlington…poor Lake Arlington….click here to see some sickly looking fish.

https://barnettshalehell.wordpress.com/2015/01/11/cadmium-superfund-site-near-paluxy-ft-worth-drink-water-fracking-uban-drilling-fail/
When I looked at local superfund sites to see what gas extraction activities were near it, I found a Cadmium superfund near a padsite and Google earth in 2014 of July showed a frac pool….those things are huge and I think the weight of them could cause some ground movement of that Cadmium?
Then I wanted to see where the nearest injection well was and found the Brentwood location five miles away and that is also where the evaporation pilot program was is..Sarah, can you help me find out if those Evras evaporation units are still there? I recall when Ft Worth did their million dollar air quality study that I believe it was said those units or not all four units were running. I took issue that they were not using scrubbers simply because it was not mandated (like in California).
Last Q…did Chesapeake actually get the piping completed from the other nearby padsites? I recall (then) Senator Davis having an issue with piping around produced water in unregulated polyethylene piping.
Thanks
Kim Feil

Since TX Statute 253.005 forbids drilling in heavily settled municipalities, I unsuccessfully ran for City Council Seat to try to enforce this. Since Urban Drilling, our drinking water has almost tripled for TTHM's. Before moving to Arlington in 1990, I lived in Norco’s “cancer alley”, a refinery town. It was only after Urban Drilling in Arlington did I start having health effects. After our drill site was established closest to my home, the chronic nosebleeds started. I know there are more canaries here in Arlington having reactions to our industrialized airshed (we have 55-60 padsites of gas wells). Come forward and report to me those having health issues especially if you live to the north/northwest of a drill site so I can map your health effects on this blog. My youtube account is KimFeilGood. FAIR USE NOTICE: THIS SITE MAY CONTAIN COPYRIGHTED MATERIAL THE USE OF WHICH HAS NOT ALWAYS BEEN SPECIFICALLY AUTHORIZED BY THE COPYRIGHT OWNER. MATERIAL FROM DIVERSE AND SOMETIMES TEMPORARY SOURCES IS BEING MADE AVAILABLE IN A PERMANENT UNIFIED MANNER, AS PART OF AN EFFORT TO ADVANCE UNDERSTANDING OF THE SOCIAL JUSTICE ISSUES ASSOCIATED WITH EMINENT DOMAIN AND THE PRIVATIZATION OF PUBLIC INFRASTRUCTURE (AMONG OTHER THINGS). IT IS BELIEVED THAT THIS IS A 'FAIR USE' OF THE INFORMATION AS ALLOWED UNDER SECTION 107 OF THE US COPYRIGHT LAW. IN ACCORDANCE WITH TITLE 17 USC SECTION 107, THE SITE IS MAINTAINED WITHOUT PROFIT FOR THOSE WHO ACCESS IT FOR RESEARCH AND EDUCATIONAL PURPOSES. FOR MORE INFORMATION, SEE: HTTP://WWW.LAW.CORNELL.EDU/ TO USE MATERIAL REPRODUCED ON THIS SITE FOR PURPOSES THAT GO BEYOND 'FAIR USE', PERMISSION IS REQUIRED FROM THE COPYRIGHT OWNER INDICATED WITH A NAME AND INTERNET LINK AT THE END OF EACH ITEM. (NOTE: THE TEXT OF THIS NOTICE WAS ALSO LIFTED FROM CORRIDORNEWS.BLOGSPOT.COM)
View all posts by Kim Triolo Feil →
This entry was posted in Uncategorized and tagged brentwood, cadmium, chesapeake, contamination, disposal wells, drinking water, epa, evaporation, ft worth, injeciton, injection, lake arlington, migration, nickel, paluxt, quicksilver, salt, saltwater disposal wells, site, superfund, SWD, Uncategorized, water, wells. Bookmark the permalink.