The TCEQ has to listen to the public’s ideas when submitting their State Implementation Plan to come into the (inadequate) Ozone 75 ppb compliance set forth in the Clean Air Act.

YOU have til’ 2/11/15 to get your comments in, so please click here. Select the  sixth one in the drop down box (2013-015-SIP-NR…) that corresponds to “Dallas-Fort Worth (DFW) Attainment Demonstration State Implementation Plan (SIP) revision”

The Public Hearing was held at Arlington City Hall on January 15, 2015 and took on a life of its own as Downwinders At Risk representative, Jim Schermbeck, (at five minutes into the following video) deputized the citizens in the audience. We pledged to help persuade the Texas Federal Marshals and the EPA  to   M A K E   TCEQ  do its job to uphold the Clean Air Act. 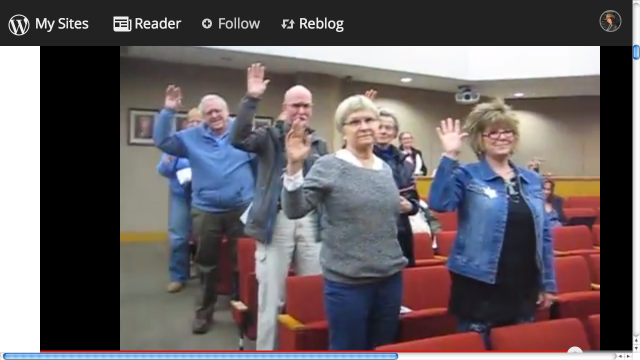 The meeting opened with informal Q&A of TCEQ staff with the public. Harriet Irby was quick to seize the opportunity ….

David Cozad was offered a “side” conversation with someone regarding the lame answers he received on why solar isn’t being embraced/included in modeling by TCEQ.

I grilled them about who would take responsibility to use closed flowback tanks in Urban Drilling since the federal and local Arlington government failed us…they deferred me to the RRC at which I retorted sarcastically… “the same RRC that is ignoring the Denton fracking ban”.

Smitty Smith and  two nurses spoke as well as some others at this poorly attended hearing. Across town in Irving being held at the same time was a frackquake meeting, so maybe thats where the other people that like to breathe clean air was last night?

What I felt was THE MOST IMPRESSIVE SPEECH of the evening was by Faith Chatam..

Lon Burnam, former Ft Worth House of Representative, shared with us his story of his breathing problems as a child…

Thank you Lon Burnam for all the years of faithful service to the public. 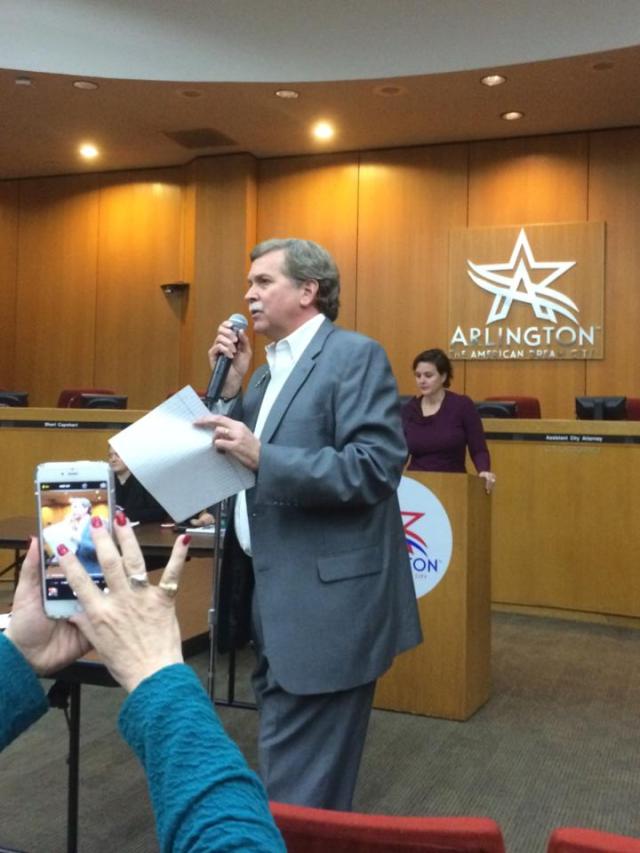 Since TX Statute 253.005 forbids drilling in heavily settled municipalities, I unsuccessfully ran for City Council Seat to try to enforce this. Since Urban Drilling, our drinking water has almost tripled for TTHM's. Before moving to Arlington in 1990, I lived in Norco’s “cancer alley”, a refinery town. It was only after Urban Drilling in Arlington did I start having health effects. After our drill site was established closest to my home, the chronic nosebleeds started. I know there are more canaries here in Arlington having reactions to our industrialized airshed (we have 55-60 padsites of gas wells). Come forward and report to me those having health issues especially if you live to the north/northwest of a drill site so I can map your health effects on this blog. My youtube account is KimFeilGood. FAIR USE NOTICE: THIS SITE MAY CONTAIN COPYRIGHTED MATERIAL THE USE OF WHICH HAS NOT ALWAYS BEEN SPECIFICALLY AUTHORIZED BY THE COPYRIGHT OWNER. MATERIAL FROM DIVERSE AND SOMETIMES TEMPORARY SOURCES IS BEING MADE AVAILABLE IN A PERMANENT UNIFIED MANNER, AS PART OF AN EFFORT TO ADVANCE UNDERSTANDING OF THE SOCIAL JUSTICE ISSUES ASSOCIATED WITH EMINENT DOMAIN AND THE PRIVATIZATION OF PUBLIC INFRASTRUCTURE (AMONG OTHER THINGS). IT IS BELIEVED THAT THIS IS A 'FAIR USE' OF THE INFORMATION AS ALLOWED UNDER SECTION 107 OF THE US COPYRIGHT LAW. IN ACCORDANCE WITH TITLE 17 USC SECTION 107, THE SITE IS MAINTAINED WITHOUT PROFIT FOR THOSE WHO ACCESS IT FOR RESEARCH AND EDUCATIONAL PURPOSES. FOR MORE INFORMATION, SEE: HTTP://WWW.LAW.CORNELL.EDU/ TO USE MATERIAL REPRODUCED ON THIS SITE FOR PURPOSES THAT GO BEYOND 'FAIR USE', PERMISSION IS REQUIRED FROM THE COPYRIGHT OWNER INDICATED WITH A NAME AND INTERNET LINK AT THE END OF EACH ITEM. (NOTE: THE TEXT OF THIS NOTICE WAS ALSO LIFTED FROM CORRIDORNEWS.BLOGSPOT.COM)
View all posts by Kim Triolo Feil →
This entry was posted in Uncategorized and tagged air quality, arlington, asthma, attainment, breathing, burnam, cancer, cityofarlington, copd, costs, david cozad, death, down winders at risk, epa, faith chatam, flowback tanks, harriet Irby, jim, kimfeilgood, leukemia, lon, marshals, medical, ozone, particulates, rrc, schermbeck, sip, state implementation plan, TCEQ, texas, TX Marshals, Uncategorized, US. Bookmark the permalink.