UPDATE 3/3/15 Arlington Voice reported “BREAKING: District judge dismisses lawsuit against the City of Arlington to block citizens from voting on red light camera program. The program will go to a vote on May 9.”

end update (*See below for letter copied to council)

** See below pics and video of TX Sharon speaking to Senator Craig Estes at State Capital in Austin from the “Denton defend fracking ban for local control” bus trip of 3/2/15.

In last nights vote (2/24/2015) to hold a special election for the red light camera citizen driven ballot initiative, an attorney named Andy Taylor spoke against it around 9:39 into the video. Faith Bussey told me he represents the Red Light Camera company and that they intend to sue the city.

He said the expense leading up to the vote and the time spent thus far is for naught…he said that TxDOT transportation code 707 gives the cities the right to enact red light cameras and that it is not a guaranteed right for a citizen’s initiative to force the red light cameras away. He said that he successfully litigated a similar case in Houston and won…he said Arlington would likely be sued…sounds like a fracker threat to me.

Regarding a fracking ban, would the department of health have a similar rule to the Tx State Transportation Code 707 referenced? It would be nice to know that our council has an option to create an ordinance to protect citizen’s health from the industrialized activities in urban drilling….um wouldn’t that be called Home Rule? If so, the City of Arlington abused Home Rule authority by allowing Special Use Permits and Drilling Zones near people and violated their own Arlington TX City Charter on Article 7, Section 5. 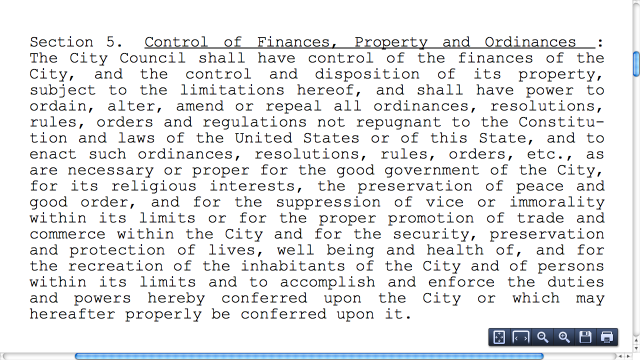 Denton was successful in forcing a citizen initiative ballot to ban fracking. Maybe they should see if the Denton City Council violated their own rules to protect public health like Arlington did.

Click here to see video of Councilman Parker commenting that he abstained from the vote to allow the special election on the red light cameras citing Article &, Section 5 for reasons of public health….what a shame he is confused about what risks public health when money is to be made…..

THIS IS obviously my councilman’s logic on public health risk……

Last Tues night an attorney threatened to sue the City of Arlington on behalf of red light camera company if the citizen led initiative (to remove the red light cameras) to force a special election was allowed…I watch this with interest in the event Arlington ever has a ballot driven fracking ban vote one day. The attorney cited Txdot transportation code 707 giving the council authority to enact red light cameras. The attorney said the citizens were not guaranteed a local right to remove a law granted to the local authority by the state.
But we just received word that the District judge dismisses lawsuit against the City of Arlington to block citizens from voting on red light camera program. The program will go to a vote on May 9.
Yesterday at the capital, I spoke out to Senator Estes referring to that parallel (red light ban/fracking ban) with the difference being that the TX Dept of Public Health is not interested in granting local authority to be protective of public health with fracking near people. (SEE BELOW PICS & VIDEO)**
Whats more pathetic is that one of our councilman is so sure that red light cameras are protective of public health that he refrained from voting to allow that special election by citing his duty to be protective of public health via the City Charter Article 7 Section 5.
The moral of this story is that we have Home Rule and that Art 7 Sect 5 both established to be protective of public health and yet we see these rules only being employed when there is money to be made (red light cameras) and not being employed when there is NOT (mineral) money to be made.
Below is some news in Calif…
—– Forwarded Message —–From: SA Breaking News Team <account@seekingalpha.com>To: kimfeil@sbcglobal.net Sent: Tuesday, March 3, 2015 5:24 PMSubject: CVX: Chevron, Linn ordered to shut California wells on water concerns
Chevron, Linn ordered to shut California wells on water concerns • 6:22 PM
Carl Surran, SA News Editor 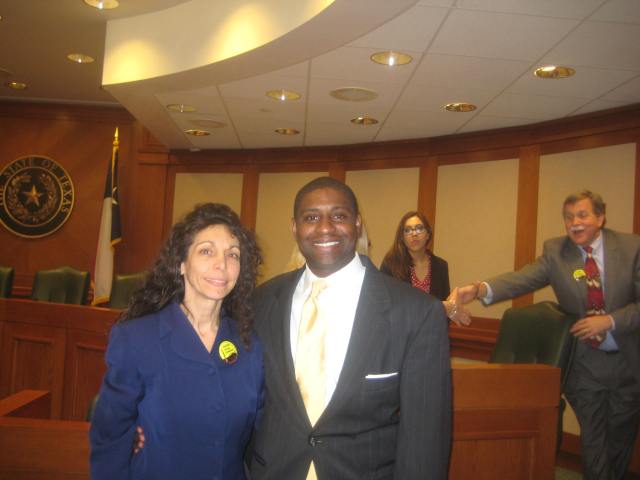 Stephen Brown, who unsuccessfully ran for Railroad Commissioner, was at the capital. He was to be the change we needed. 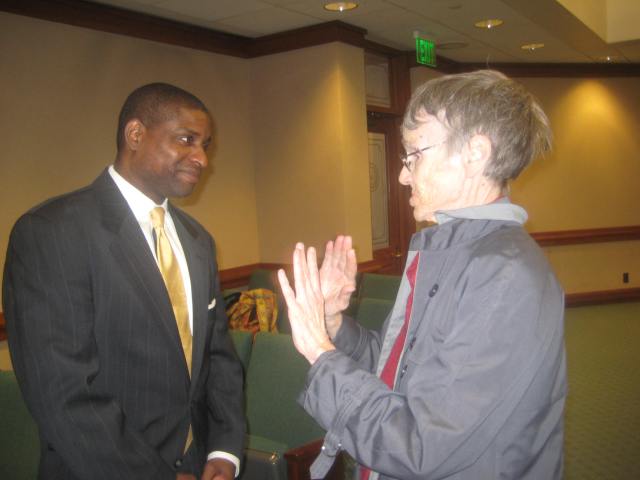 Harriet Irby is right at home networking with the suits.

Lon Maxwell Burnam is the departing state representative for Texas House District 90 in Ft Worth. 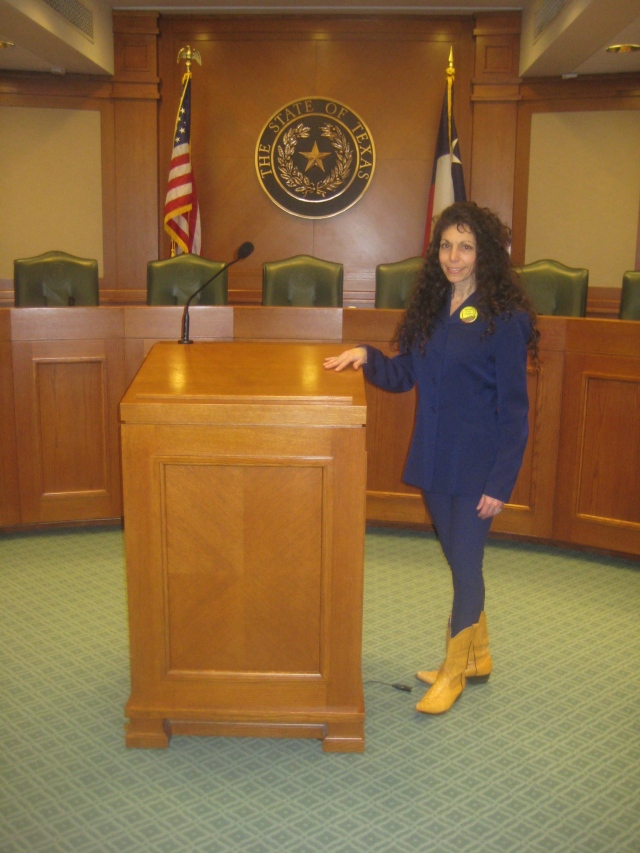 Kim Feil (me) in my second trip to Austin. My first trip was for the Railroad Commission Sunset Review.

Working session with Gene Wu, State Representative House District 137, who elected to step out of the picture.

Rotunda selfie-nasal style…on the way to the capital in the bus I had yet another nosebleed…shale style.

Thanks to Earthworks for providing the bus trip. 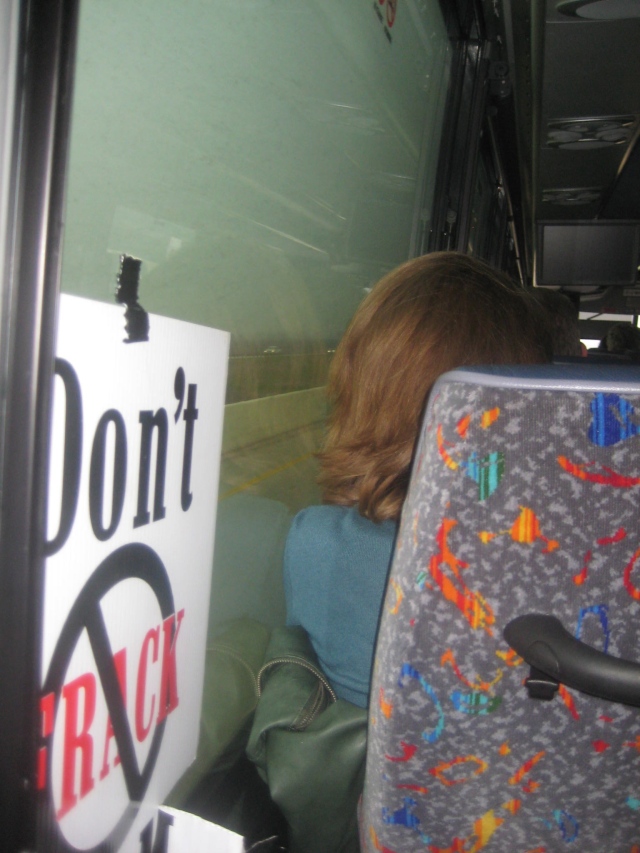 It was a really soupy weather y ride home-but we made it back to the shale to continue to suffer …for now.

Pics by other people…

Since TX Statute 253.005 forbids drilling in heavily settled municipalities, I unsuccessfully ran for City Council Seat to try to enforce this. Since Urban Drilling, our drinking water has almost tripled for TTHM's. Before moving to Arlington in 1990, I lived in Norco’s “cancer alley”, a refinery town. It was only after Urban Drilling in Arlington did I start having health effects. After our drill site was established closest to my home, the chronic nosebleeds started. I know there are more canaries here in Arlington having reactions to our industrialized airshed (we have 55-60 padsites of gas wells). Come forward and report to me those having health issues especially if you live to the north/northwest of a drill site so I can map your health effects on this blog. My youtube account is KimFeilGood. FAIR USE NOTICE: THIS SITE MAY CONTAIN COPYRIGHTED MATERIAL THE USE OF WHICH HAS NOT ALWAYS BEEN SPECIFICALLY AUTHORIZED BY THE COPYRIGHT OWNER. MATERIAL FROM DIVERSE AND SOMETIMES TEMPORARY SOURCES IS BEING MADE AVAILABLE IN A PERMANENT UNIFIED MANNER, AS PART OF AN EFFORT TO ADVANCE UNDERSTANDING OF THE SOCIAL JUSTICE ISSUES ASSOCIATED WITH EMINENT DOMAIN AND THE PRIVATIZATION OF PUBLIC INFRASTRUCTURE (AMONG OTHER THINGS). IT IS BELIEVED THAT THIS IS A 'FAIR USE' OF THE INFORMATION AS ALLOWED UNDER SECTION 107 OF THE US COPYRIGHT LAW. IN ACCORDANCE WITH TITLE 17 USC SECTION 107, THE SITE IS MAINTAINED WITHOUT PROFIT FOR THOSE WHO ACCESS IT FOR RESEARCH AND EDUCATIONAL PURPOSES. FOR MORE INFORMATION, SEE: HTTP://WWW.LAW.CORNELL.EDU/ TO USE MATERIAL REPRODUCED ON THIS SITE FOR PURPOSES THAT GO BEYOND 'FAIR USE', PERMISSION IS REQUIRED FROM THE COPYRIGHT OWNER INDICATED WITH A NAME AND INTERNET LINK AT THE END OF EACH ITEM. (NOTE: THE TEXT OF THIS NOTICE WAS ALSO LIFTED FROM CORRIDORNEWS.BLOGSPOT.COM)
View all posts by Kim Triolo Feil →
This entry was posted in Uncategorized and tagged andy taylor, arlington, attorney, austin, ballot, camera, cameras, capital, citizen, city sued, cityofarlington, denton, initative, law, led, light, lobby, lobbying, parallel, petition, red, red light, special election, state, suit, texas, tx, Uncategorized. Bookmark the permalink.