“A citizen-requested study out of Oregon State University (OSU) and the University of Cincinnati has found that people living or working near active natural gas wells may be exposed to certain pollutants at higher levels than the EPA considers safe for lifetime exposure.

Kim Anderson, an environmental chemist with OSU, and her colleagues placed air samplers on the properties of 23 volunteers living or working at fracking sites right next to a gas well or up to three miles away.

The samplers, collected over a three-week period last February, picked up high levels of PAHs (polycyclic aromatic hydrocardons), including some that are linked with increased risk of cancer and respiratory ailments.Levels were highest closest to the wells and decreased by about 30 percent with distance.They were about 10 times higher than in a rural Michigan area with no natural gas wells.
Anderson and her team were able to discern whether the PAHs came from the Earth or from pyrogenic sources like the burning of fossil fuels. The team also accounted for the influences of wood smoke and vehicle exhaust, common sources of airborne pyrogenic PAHs.” http://www.laboratoryequipment.com/articles/2015/07/lowdown-fracking

Effects of Prenatal Exposure to Air Pollutants (Polycyclic Aromatic Hydrocarbons) on the Development of Brain White Matter, Cognition, and Behavior in Later Childhood

In finding a recent study proving that PAH’s (polycyclic aromatic hydrocarbons) are indeed associated with exposures that harm brain tissue in our pre and post natal youth, I found where Exxon compares d i e s e l  (PAH)  to be six times more than the threshold of worker exposures limits than if you were to you use Exxon’s recommended frac fluids …

FYI the government tried to tell the frackers not to use diesel, but they still do….we’ve so sadly found.) 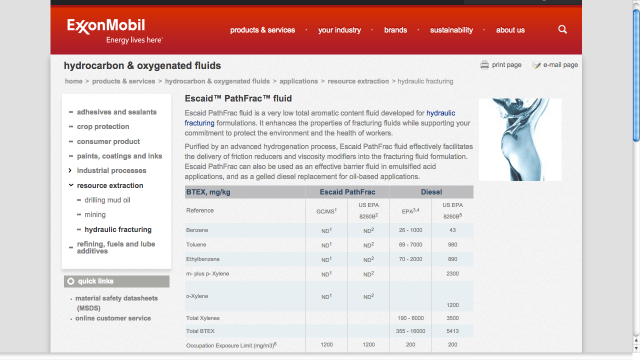 A few years ago I visited one of our City of Arlington Gas Well inspectors and looked at the MSDS sheets for the drilling/operations phase and found BTEX items. Notice that Naphtha (a form of PAH’s) is present in the MSDS sheets in this video for the Chesapeake drill site by my home and the ATT Cowboys Stadium…. 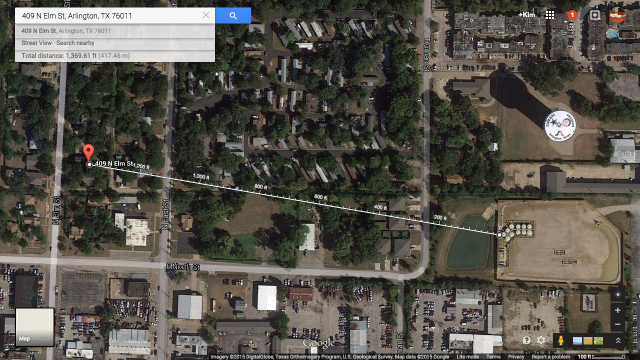 Also note at the very beginning of the video I read off the first MSDS number for petroleum crude oil to be #8002-05-9 a PAH ….. 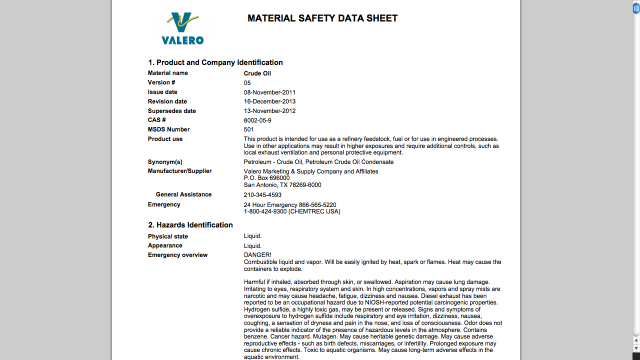 The MSDS sheets also included most of that infamous BTEX family… Toluene, Benzene, Ethylbenzene. It also had an MSDS sheet for…… *Hydrogen Sulfide!

Big note…those MSDS sheets in that video don’t even cover the hydraulic fracturing phase when the drillers hire out those companies like Schlumberger/Halliburton who have their own set of MSDS sheets. 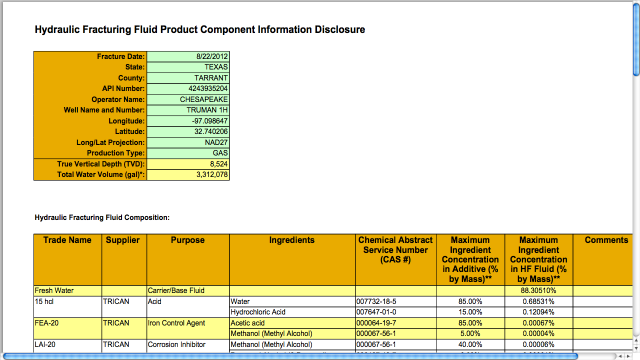 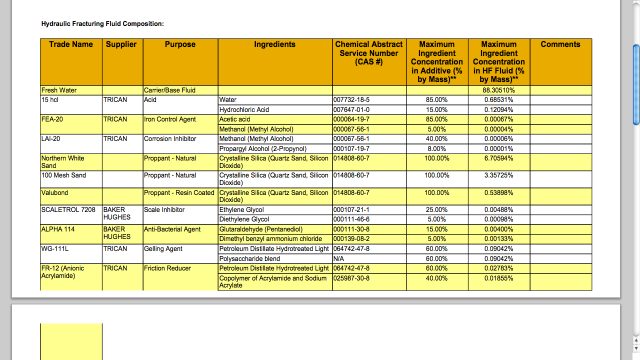 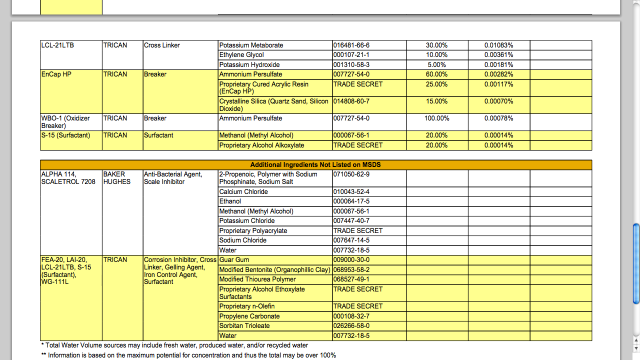 Note that FracFocus isn’t able to post the fracking ingredients until about two weeks after the frack.

The Truman/Cowboy Stadium drill site had almost 10,000,000 gallons of 3 month old stale frac fluids/sand that waited to be flowed back by my family (and the Entertainment District in Arlington gasland TX).  Per fracfocus, those three wells flowed back almost one hundred thousand gallons of frack chemicals of which about 12,000 gallons was naptha, and another 12,000 gallons was hydrochloric acid (which can liquify your lungs).

I smelled rotten eggs  at (driving by) the GM drill site when the rig was up a couple/few years ago. I called 911 and complained about the area smelling like Norco LA, a refinery town.
Can our ordinance mandate H2S inhibitors?  I ask/suggest this because Chesapeake’s MSDS sheets have H2S as evidence in this video of a meeting with Collin Gregory  http://www.youtube.com/watch?v=jSx_gLFg6Ag
responsive to my open records request for info on the Truman/Cowboy Stadium drill site. I am still unsure of if…
1)they add H2S to the drilling mud, or
2)have the H2S MSDS sheets in case it is naturally present, or
3)will be having H2S unintentionally man-made with stale flowback fluids.
I have had reports of rotten eggs odors from other padsites in Arlington and the Arlington Compressor Station, and so we cannot trust the industry rhetoric that we do not have sour gas in the Barnett Shale…it may not normally occur “naturally” in dry gas areas, but Chesapeake acknowledges H2S via MSDS sheets in this video.
Patents like 8097230 B2, 8136592 B2, and 3402770 show that H2S and carbon disulfide is desired to be added to drill with for enhanced mineral recovery….which would explain why the Hercules product (diethamolamine) is needed (as an aerial spray mist) when handling the sulphide tainted drilling mud. I know that mud farming isn’t really regulated…I bet no one from the city ever inquired or cares about “those” loopholes…and I will not tell you what they are..someone needs to find it out for themselves that is on city payroll – how bout’ someone from the storm water run off department?
In October someone filmed (acid gases?) venting from the Pantego well by Bailey Junior High, put it on youtube, http://www.youtube.com/watch?v=tNxgaPXpbS0 and then emailed it to me. Pantego has “no venting allowed” in their ordinance and apparently is not enforcing it just like Arlington doesn’t enforce the use of pollution mitigation devices like ventless flowback tanks.
Recall that stale flowback water can sour a well.  AFD responded to a sickened Jean Stephens at the Chesapeake Lynn Smith flowback last March in her business parking lot. The Truman/Cowboy Stadium drill site currently has almost 10,000,000 gallons of 3 month old stale frac fluids/sand waiting to be flowed back by my family.  Per fracfocus, those three wells will be flowing back almost one hundred thousand gallons of frack chemicals of which about 12,000 gallons is naptha (http://fscimage.fishersci.com/msds/89683.htm) and another 12,000 gallons is hydrochloric acid ...don’t ya think our fire department’s leadership should help fix our drilling ordinance if I can’t get their attention…or is our fire department just focused on blow outs?  Slow, low pressure emission events can poison us too.
We need a Hercules miracle to get a safe “upcoming” flowback near our Entertainment District with “H2S & frack chemical” protection that I need my fire department to help me ask for from Chesapeake.
The numerous emails gone unanswered show my town’s leadership is negligent in protecting public health risks from urban drilling by allowing OPEN HATCH FLOWBACK TANKS.

—– Forwarded Message —-
From: “Rick_Sumrall@deq.state.ms.us” <Rick_Sumrall@deq.state.ms.us>
To: kimfeil@sbcglobal.net
Cc: Joanne_Rials@deq.state.ms.us
Sent: Thu, November 29, 2012 8:20:47 AM
Subject: Recent Inquiry
Attached you will find a Material Safety Data Sheet for the chemical to be
used a Hercules. It is called CC Eliminator. It works by reacting with any
hydrogen sulfide they may become airborne during the sludge removal
operations. It differs from a masking agent in that it reacts with and
removes the compound(H2S) rather than simply conceal the odor. A continuous
spray, or mist, of the CC Eliminator will be applied over the impounding
basin during removal operations.Thank you for your interest in this matter.(See attached file: DOC000.PDF)
Richard Sumrall, P.E.
Chemical Branch
Environmental Compliance & Enforcement Division
Mississippi Department of Environmental Quality

Since TX Statute 253.005 forbids drilling in heavily settled municipalities, I unsuccessfully ran for City Council Seat to try to enforce this. Since Urban Drilling, our drinking water has almost tripled for TTHM's. Before moving to Arlington in 1990, I lived in Norco’s “cancer alley”, a refinery town. It was only after Urban Drilling in Arlington did I start having health effects. After our drill site was established closest to my home, the chronic nosebleeds started. I know there are more canaries here in Arlington having reactions to our industrialized airshed (we have 55-60 padsites of gas wells). Come forward and report to me those having health issues especially if you live to the north/northwest of a drill site so I can map your health effects on this blog. My youtube account is KimFeilGood. FAIR USE NOTICE: THIS SITE MAY CONTAIN COPYRIGHTED MATERIAL THE USE OF WHICH HAS NOT ALWAYS BEEN SPECIFICALLY AUTHORIZED BY THE COPYRIGHT OWNER. MATERIAL FROM DIVERSE AND SOMETIMES TEMPORARY SOURCES IS BEING MADE AVAILABLE IN A PERMANENT UNIFIED MANNER, AS PART OF AN EFFORT TO ADVANCE UNDERSTANDING OF THE SOCIAL JUSTICE ISSUES ASSOCIATED WITH EMINENT DOMAIN AND THE PRIVATIZATION OF PUBLIC INFRASTRUCTURE (AMONG OTHER THINGS). IT IS BELIEVED THAT THIS IS A 'FAIR USE' OF THE INFORMATION AS ALLOWED UNDER SECTION 107 OF THE US COPYRIGHT LAW. IN ACCORDANCE WITH TITLE 17 USC SECTION 107, THE SITE IS MAINTAINED WITHOUT PROFIT FOR THOSE WHO ACCESS IT FOR RESEARCH AND EDUCATIONAL PURPOSES. FOR MORE INFORMATION, SEE: HTTP://WWW.LAW.CORNELL.EDU/ TO USE MATERIAL REPRODUCED ON THIS SITE FOR PURPOSES THAT GO BEYOND 'FAIR USE', PERMISSION IS REQUIRED FROM THE COPYRIGHT OWNER INDICATED WITH A NAME AND INTERNET LINK AT THE END OF EACH ITEM. (NOTE: THE TEXT OF THIS NOTICE WAS ALSO LIFTED FROM CORRIDORNEWS.BLOGSPOT.COM)
View all posts by Kim Triolo Feil →
This entry was posted in Uncategorized and tagged 8002-05-9, arlington, ashley, att stadium, Barnett, benzene, bobcat, btex, chemical, chesapeake, cityofarlington, collin gregory, cowboys stadium, crude, diesel, driling, drilling, Engineering, ethylbenzene, exhaust, Exxon, frac, fracfocus, fracking, fracturing, kim anderson, kim feil, kimfeilgood, magazine, msds, neighborhoods, nexdoor, nextdoor, offgassing, oil, osu, pah, PAH's, poison, pollution, polycyclic aromatic hydrocarbon, Polycyclic Aromatic Hydrocarbons, shale, solvent, storage tanks, texas, toulene, Truman, Uncategorized, urban, venting, VOC, xylene. Bookmark the permalink.