Posted on July 5, 2015 by Kim Triolo Feil
The 4th of July Parade came fast for an newly organized group-see coverage below.

Here is the water testing link from Terracon from that frack spill of April 11 & 12th 2015.

And as I sat behind councilwoman, Wilemon, I doodled this during the sermon at FBCA…

This is what I was doodling in church just after that LABC spill…can’t focus on the pastor’s message…thinkn’ bout’ those LABC congregants that had to move their services away from their church during the evacuation event.

Why did we abort the protest?…Along with other strategic moves to not alienate those we wish to merely inform…..it was also the reality of some folks not wanting to be that close and downwind to fracking at LABC. The last time we got too close…two of us got nose bleeds (that lasted weeks for me-months for another person) …one of us is at MD Anderson getting chemo for leukemia, and another one of us had off the chart high red blood counts .‪

So today we participated in the Arlington 4th of July Parade and that was a much safer gig than taking pictures and handing out flyers near drill sites.

Heres another pic of us by photographer Paul Knudsen…

From: Kevin Donovan
To: kim feil
Sent: Monday, July 6, 2015 9:07 AM
Subject: Re: [ArlingtonConservationCouncil] Parade Follow Up

I don’t know when ACC registered for the parade, but to answer your question about placement – it is not first come, first served.  Our lineup coordinator looks at all the entries in the parade and lines them up in a manner which makes for a mix of different types of entries that (hopefully) will be pleasing and interesting to parade spectators.
As for the gas powered carts, I will share your comments with our board.
Thanks,
Kevin Donovan
Assembly Area Coordinator
Arlington 4th of July Association
www.arlington4th.org

And here is a letter I sent to the Arlington Conservation group who had a series of unfortunate technical events that made them miss being allowed in the parade despite only being 5 minutes late (APD had already opened the street)…had ACC been positioned earlier in the line up, then they would have been able to be in the parade albeit at the very end…but at least all that time spent on such a beautiful float would have not been for naught….

FB Paul Knudsen -thanks PAUL-now the people can see this thanks to YOU!

The environmental group I was with was actually in float #150 of #158. My experience was that I found a tired group of diehard parade goers still in the crowd…I personally feel that in July its too hot to have high sun on people and pets mixing w/concrete and street…and then if you take the two-plus hour time to see the seemingly endless flickr pics on the 4th of July Assoc site.

but to put it in a nice way to make you feel better….you didn’t miss much by not being in the parade if you were at the end…if that makes anybody feel less pained by the unfortunate events of your position in the parade along with the technical set backs.
I think we need two parades to shorten what the 4th parade has grown into (bigger is not necessarily better)…one for stinky floats, buses, firetrucks/vintage cars/politicions? and the other…. for those innocent (breathers in the crowds) people on foot or cycling or riding in an electric car that don’t need to breathe all that.
Sincerely, Kim

Me in front of my church pointing to the electric vehicle chanting “LISTEN  – its quiet….SMELL –  its clean…….what do you need?….(holding up and tossing back my respirator).- not THIS!”

*I went back to view the rest of the flickr pics and noticed (a prior years picture #57) was a white CHESAPEAKE truck with big lettering – “Compressed Natural Gas Vehicle”….and didn’t look like it was decorated #brokeParadeRules? 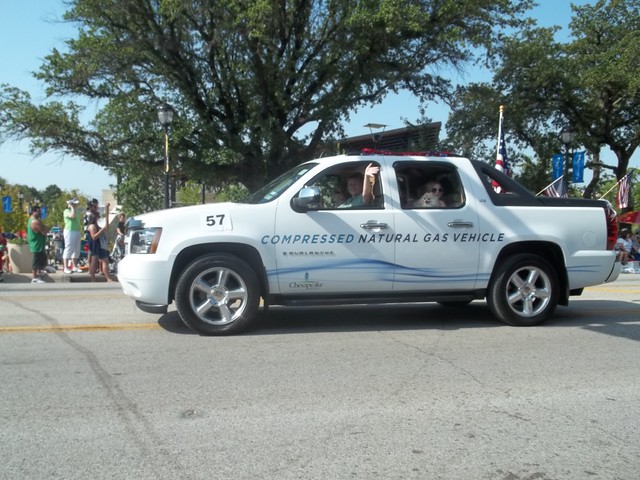 But then again natural gas interests seem to not have to (shale) play by the rules. Our town loves to promote NG – read here about that.

Since TX Statute 253.005 forbids drilling in heavily settled municipalities, I unsuccessfully ran for City Council Seat to try to enforce this. Since Urban Drilling, our drinking water has almost tripled for TTHM's. Before moving to Arlington in 1990, I lived in Norco’s “cancer alley”, a refinery town. It was only after Urban Drilling in Arlington did I start having health effects. After our drill site was established closest to my home, the chronic nosebleeds started. I know there are more canaries here in Arlington having reactions to our industrialized airshed (we have 55-60 padsites of gas wells). Come forward and report to me those having health issues especially if you live to the north/northwest of a drill site so I can map your health effects on this blog. My youtube account is KimFeilGood. FAIR USE NOTICE: THIS SITE MAY CONTAIN COPYRIGHTED MATERIAL THE USE OF WHICH HAS NOT ALWAYS BEEN SPECIFICALLY AUTHORIZED BY THE COPYRIGHT OWNER. MATERIAL FROM DIVERSE AND SOMETIMES TEMPORARY SOURCES IS BEING MADE AVAILABLE IN A PERMANENT UNIFIED MANNER, AS PART OF AN EFFORT TO ADVANCE UNDERSTANDING OF THE SOCIAL JUSTICE ISSUES ASSOCIATED WITH EMINENT DOMAIN AND THE PRIVATIZATION OF PUBLIC INFRASTRUCTURE (AMONG OTHER THINGS). IT IS BELIEVED THAT THIS IS A 'FAIR USE' OF THE INFORMATION AS ALLOWED UNDER SECTION 107 OF THE US COPYRIGHT LAW. IN ACCORDANCE WITH TITLE 17 USC SECTION 107, THE SITE IS MAINTAINED WITHOUT PROFIT FOR THOSE WHO ACCESS IT FOR RESEARCH AND EDUCATIONAL PURPOSES. FOR MORE INFORMATION, SEE: HTTP://WWW.LAW.CORNELL.EDU/ TO USE MATERIAL REPRODUCED ON THIS SITE FOR PURPOSES THAT GO BEYOND 'FAIR USE', PERMISSION IS REQUIRED FROM THE COPYRIGHT OWNER INDICATED WITH A NAME AND INTERNET LINK AT THE END OF EACH ITEM. (NOTE: THE TEXT OF THIS NOTICE WAS ALSO LIFTED FROM CORRIDORNEWS.BLOGSPOT.COM)
View all posts by Kim Triolo Feil →
This entry was posted in Uncategorized and tagged 4th of July arlington parade, are you willing to die for me, arlington, carrizo, cityofarlington, drilling, drillsite, electric car, ev, fbca, fracking, jefsus, Jesus, Kathryn wilemon, labc, lake arlington baptist church, leukemia, liveable arlington, nissan leaf, Parade, protest, spill, texas, tx, Uncategorized, vehicle, zero emissions. Bookmark the permalink.