UPDATE…..the March 10 2015 LABC produced water spill event showed on my PIR request to NOT have a follow-up prevention report submitted as required by our gas well ordinance…hmmmn somebody at the city not doing their job!

Ever read something and think you know what it means only to find out the wording was misleading?

We had an extreme amount of emergency dispatch and no follow up paperwork as mandated by our City of Arlington Gaswell Ordinance 5.02 section g) that requires… “A follow- up incident investigation to determine the cause of the incident and require the implementation of corrective measures.” 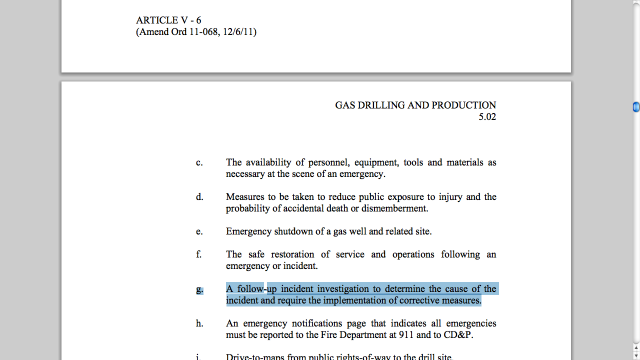 1.) On January 31, 2013 extensive emergency response to odors overtaking the Entertainment District was found to be coming from the Bobcat1H. The operator said the source of the odor was stale water when drilling out the plugs, pulling up the equipment, and installing gas lift valves. Nothing more was required of the operator from our City of Arlington investigators for a follow up  in how they intend to prevent this from ever happening again. People said they were sickened by the odors…TCEQ wrote a letter saying to “…make effort to prevent re-occurance…”.

Through a PIR, the city’s LAME response to my request to see the document required of 5.02 section g) was “Nothing was found out of compliance at the site.”

The wording does not say anything about ignoring 5.02 if in compliance…it specifically says an “INCIDENT” needs a corrective action.

Arlington’s gas well ordinance is specific about preventing nuisance conditions and odors…what part is missing from this lesson to be learned?

Nobody at the city or the operator level gives a frack about preventing nuisance conditions from Urban Drilling even by our cash-cow Entertainment District. 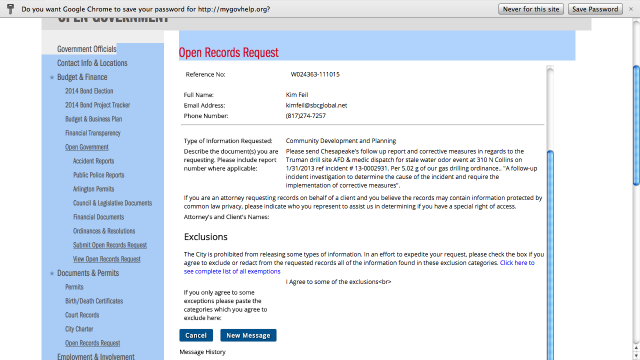 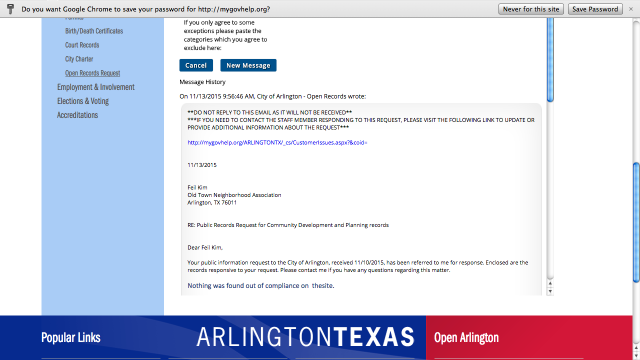 And so the city is complacent to have send such a grand emergency response and then required NO follow up plan from Chesapeake to prevent a future occurrence?

At least the TCEQ recognized and communicated appropriately……. 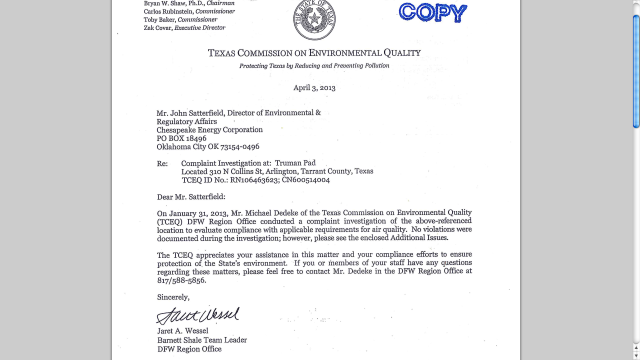 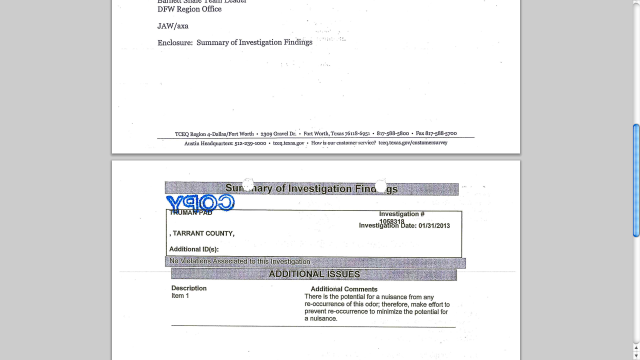 Since TX Statute 253.005 forbids drilling in heavily settled municipalities, I unsuccessfully ran for City Council Seat to try to enforce this. Since Urban Drilling, our drinking water has almost tripled for TTHM's. Before moving to Arlington in 1990, I lived in Norco’s “cancer alley”, a refinery town. It was only after Urban Drilling in Arlington did I start having health effects. After our drill site was established closest to my home, the chronic nosebleeds started. I know there are more canaries here in Arlington having reactions to our industrialized airshed (we have 55-60 padsites of gas wells). Come forward and report to me those having health issues especially if you live to the north/northwest of a drill site so I can map your health effects on this blog. My youtube account is KimFeilGood. FAIR USE NOTICE: THIS SITE MAY CONTAIN COPYRIGHTED MATERIAL THE USE OF WHICH HAS NOT ALWAYS BEEN SPECIFICALLY AUTHORIZED BY THE COPYRIGHT OWNER. MATERIAL FROM DIVERSE AND SOMETIMES TEMPORARY SOURCES IS BEING MADE AVAILABLE IN A PERMANENT UNIFIED MANNER, AS PART OF AN EFFORT TO ADVANCE UNDERSTANDING OF THE SOCIAL JUSTICE ISSUES ASSOCIATED WITH EMINENT DOMAIN AND THE PRIVATIZATION OF PUBLIC INFRASTRUCTURE (AMONG OTHER THINGS). IT IS BELIEVED THAT THIS IS A 'FAIR USE' OF THE INFORMATION AS ALLOWED UNDER SECTION 107 OF THE US COPYRIGHT LAW. IN ACCORDANCE WITH TITLE 17 USC SECTION 107, THE SITE IS MAINTAINED WITHOUT PROFIT FOR THOSE WHO ACCESS IT FOR RESEARCH AND EDUCATIONAL PURPOSES. FOR MORE INFORMATION, SEE: HTTP://WWW.LAW.CORNELL.EDU/ TO USE MATERIAL REPRODUCED ON THIS SITE FOR PURPOSES THAT GO BEYOND 'FAIR USE', PERMISSION IS REQUIRED FROM THE COPYRIGHT OWNER INDICATED WITH A NAME AND INTERNET LINK AT THE END OF EACH ITEM. (NOTE: THE TEXT OF THIS NOTICE WAS ALSO LIFTED FROM CORRIDORNEWS.BLOGSPOT.COM)
View all posts by Kim Triolo Feil →
This entry was posted in Uncategorized and tagged bobcat, chesapeake, dispatch, fail, follow, odors, PIR, prevention, stale, Truman, Uncategorized, up, water. Bookmark the permalink.