UPDATE 1/20/16 an orchard in MODESTO California is being purposefully flooded w/storm water stock and they are tracking the health of the trees being subjected to the waters to see if they can recharge the ground water stolen by drought and agriculture….but R they tracking the Uranium (found in higher numbers in MODESTO CA) that was brought to surface from the drought and other factors as listed below?

Thank you for your email. I was not aware of the uranium pollution but thank you for pointing that out!

I point out that in addition to naturally occurring uranium…we also have man-made mining sources of uranium water contamination in many states in America.

So too can a different type of risk to Texan’s drinking water make headlines one day….only the 2 million affected in the YAHOO AP story will pale in comparison to the number of drinkers we have in the DFW area.

This 1994 USGS link , which is over 20 years old, shows research that uncovered pesticide detects along the Texas Trinity River (which supplies over 50% of Texans their drinking water). Note this is a SURFACE runoff problem. 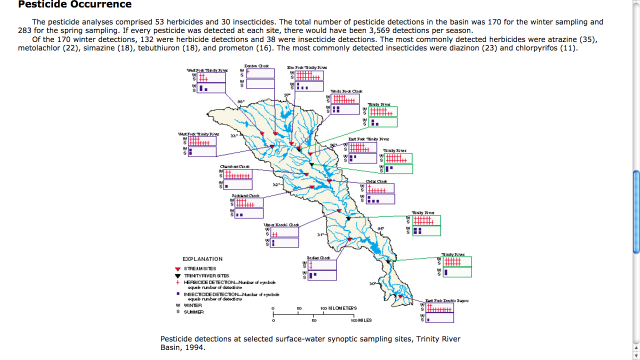 What if this research was to be done showing fracking related effluent detects in areas where our aquifers run through? Sure we have a long history of drilling in Texas but less than a decade ago thanks to the UNconventional hydraulic fracking method, we have this MASSIVE build out unlike we’ve ever seen…..an EXPONENTIAL RISK for more surface run off of these padsites!

Prior to our recent monsoon rains, we had drought. What natural or man-made/fracking related ground water toxins were “drawn up” (Modesto effect)? 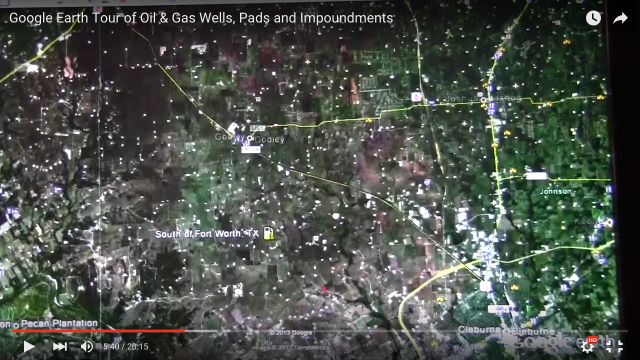 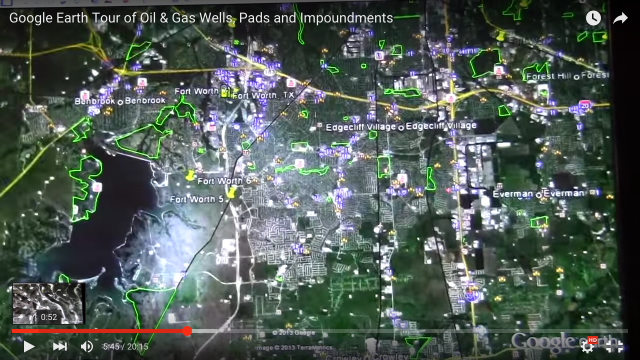 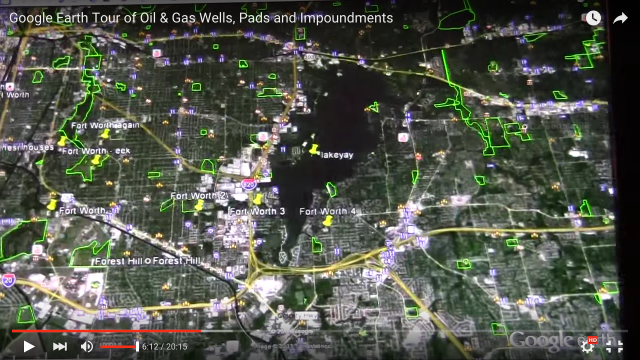 What is the longterm or cumulative risk of fracking in addition to our flooding and drought on Texan’s drinking water supplies?

Trinity River Authority says of our DFW Water Sources: “Over 90% of the water supply for Region C is surface water, almost all of which originates from reservoirs. Although constituting less than 10% of Region C supplies, groundwater is still an important source of water, especially in rural areas”. 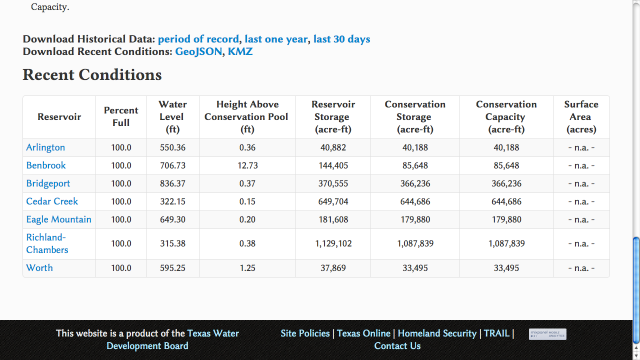 Per the TWDB, “From the confluence of its Elm and West Forks near Dallas, the Trinity River flows to Trinity Bay, which drains to the Gulf of Mexico.  Smaller streams within the basin include the Clear, East, Elm, and West forks of the Trinity River and Cedar Creek and Richland Chambers”.

FYI we pump water from Richland-Chambers via a 90 inch pipeline to Lake Benbrook which supplies part of the Ft Worth/Arlington area. 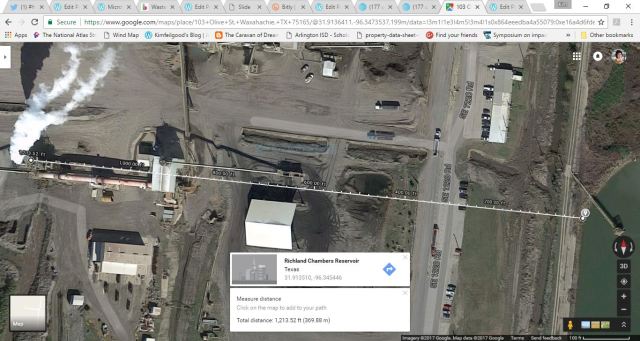 Lake Arlington is said to be recharged with rain water (acid rain from all these drill sites?) and only pumps in water when the levels get too low. Arlington has two water treatment plants. The Pierce-Birch plant sources from (acid-rain water charged) Lake Arlington. The John KuBala plant, sources from Cedar Creek and Richland Chambers.

Maybe you spray your lawn near one of these precious bodies of water, maybe you take your boat out on one, or maybe you know of a drill site or two (or at least a few …like by Lake Arlington).

In every county along the *way  of the Trinity River is fracking sites….find yours and see for yourself….

Collin (no fracking there per this website-relocate there? ….yes if just for “localized” non-fracked good air)

So if SURFACE run off caused detects of pesticides decades ago….

just think what the surface “and” ground water abNORMal risk from….

MINING for fossil fuels has

“in the pipelines” for us?

As usual I will end w/related or unrelated love letters to our Arlington TX city leaders as evidence that they were warned of these risks.

Dear UC Davis staff and NCTCOG Water Resource Council (Ms Evans please forward as appropriate), my name is Kim Feil, I live in Arlington Texas and concern myself with environmental trends. As a UT Arlington business graduate, I do research and try to connect the right people with the relevant news items as they break and do this full time on a volunteer basis. Networking in this manner serves as an advantage in having parsed numerous stories in the interest of helping protect public health.
Today there was a report http://www.mercurynews.com/ci_29405743/california-drought-stormwater-floods-modesto-almond-orchard-experiment of an experiment occurring in an area that I am watching in terms of known ground/drinking water contamination. MODESTO California was one of the cities that had Uranium in their drinking water that was “drawn up” from drought, aquifer pumping, and irrigation of crops/orchards. When that story broke last month, I also looked at our Texas Trinity River and recognized a similar NORM risk to our water from those factors in addition to the added risk of our fracking build out with toxic SURFACE storm water run off.
Since then UT Arlington’s CLEAR has more information of indirect aggregate risks to GROUND water quality in their latest study…
“Indirect evidence of pollutant migration via microannular fissures in well casing”
If you want the full UTA Clear pdf. please email zac@informenv.com and ask for the details on their study, “Elucidating hydraulic fracturing impacts on groundwater quality using a regional geospatial statistical modeling approach”
Now that UC Davis is studying the effects of purposefully flooding an almond orchard in MODESTO, I am trusting that the disturbed uranium levels in the drinking water from tainted ground water supplies will be monitored in this experiment?  I suspect dilution to the uranium levels will occur if you have a successful attempt to recharge the aquifer that has been drawn down.
I’m just making sure that UC Davis knows to talk to Univ. of Nebraska (who studied the uranium). One or both universities may want to add a focus on looking at the change in Uranium levels after this experiment to see how it affects the almonds and the ground water drinking source.
It is important that if recharging aquifers in this manner worsens water contamination that brownfield areas be avoided of course.
If someone from each university could keep me in the loop on if this info was helpful, that would be appreciated.
Sincerely,
Kim Feil
Urban Drilling anti-specialist
—– Forwarded Message —–
From: kim feil <kimfeil@sbcglobal.net>
To: Jeff Williams <jeff.williams@arlingtontx.gov>; Robert Rivera <robert.rivera@arlingtontx.gov>; Lana Wolff <lana.wolff@arlingtontx.gov>; Charlie Parker <charlie.parker@arlingtontx.gov>; Robert Shepard <robert.shepard@arlingtontx.gov>; Jimmy Bennett <jimmy.bennett@arlingtontx.gov>; Michael Glaspie <michael.glaspie@arlingtontx.gov>; Sheri Capehart <sheri.capehart@arlingtontx.gov>; Kathryn Wilemon <kathryn.wilemon@arlingtontx.gov>; Jim Parajon <jim.parajon@arlingtontx.gov>; Trey Yelverton <trey.yelverton@arlingtontx.gov>; Cynthia Simmons <cynthia.simmons@arlingtontx.gov>
Sent: Tuesday, December 8, 2015 4:10 PM
Subject: CHK bankruptcy risk / New Study Finds O&G Methane Emissions Barnett Shale Almost Twice What Official Estimates Suggest

So in case some council members want citizens to feel our town takes an interest in climate change and weather pattern instability…FYI
Another issue is the extreme loss in share value of Chesapeake, our predominant driller here in Arlington; can we have a plan to not renew any new leases under new ownership at the very least for those padsites that violate our 600 ft buffer? Those rejections are defendable under HB40 terms for “reasonable” setback and has been in our ordinance and would pass the “five year test”.
Thank you for your consideration in mitigating the damage done to our liveability due to urban drilling and the experiment that is failing the test of time and wisdom in retrospect.
We have to really embrace what is going on in California that took ten years to come to fruition (no pun intended) with their uranium problem (especially in the city of Modesto)….if you associate that GROUND WATER risk with the regions where we source our drinking water (TWDB Region 6 which is 90% surface water recharged), then surface spills from nearby drill sites (like what happened 5 years ago with Quicksilver spilling into Lake Arlington) is worth the real worry.
http://bit.ly/1YX6JZa
Kim Feil
—– Forwarded Message —–
From: kim feil <kimfeil@sbcglobal.net>
To:
Sent: Monday, December 7, 2015 9:55 PM
Subject: {NCTCA} Fw: New Study Finds Oil & Gas Methane Emissions in the Barnett Shale Almost Twice What Official Estimates Suggest

Since TX Statute 253.005 forbids drilling in heavily settled municipalities, I unsuccessfully ran for City Council Seat to try to enforce this. Since Urban Drilling, our drinking water has almost tripled for TTHM's. Before moving to Arlington in 1990, I lived in Norco’s “cancer alley”, a refinery town. It was only after Urban Drilling in Arlington did I start having health effects. After our drill site was established closest to my home, the chronic nosebleeds started. I know there are more canaries here in Arlington having reactions to our industrialized airshed (we have 55-60 padsites of gas wells). Come forward and report to me those having health issues especially if you live to the north/northwest of a drill site so I can map your health effects on this blog. My youtube account is KimFeilGood. FAIR USE NOTICE: THIS SITE MAY CONTAIN COPYRIGHTED MATERIAL THE USE OF WHICH HAS NOT ALWAYS BEEN SPECIFICALLY AUTHORIZED BY THE COPYRIGHT OWNER. MATERIAL FROM DIVERSE AND SOMETIMES TEMPORARY SOURCES IS BEING MADE AVAILABLE IN A PERMANENT UNIFIED MANNER, AS PART OF AN EFFORT TO ADVANCE UNDERSTANDING OF THE SOCIAL JUSTICE ISSUES ASSOCIATED WITH EMINENT DOMAIN AND THE PRIVATIZATION OF PUBLIC INFRASTRUCTURE (AMONG OTHER THINGS). IT IS BELIEVED THAT THIS IS A 'FAIR USE' OF THE INFORMATION AS ALLOWED UNDER SECTION 107 OF THE US COPYRIGHT LAW. IN ACCORDANCE WITH TITLE 17 USC SECTION 107, THE SITE IS MAINTAINED WITHOUT PROFIT FOR THOSE WHO ACCESS IT FOR RESEARCH AND EDUCATIONAL PURPOSES. FOR MORE INFORMATION, SEE: HTTP://WWW.LAW.CORNELL.EDU/ TO USE MATERIAL REPRODUCED ON THIS SITE FOR PURPOSES THAT GO BEYOND 'FAIR USE', PERMISSION IS REQUIRED FROM THE COPYRIGHT OWNER INDICATED WITH A NAME AND INTERNET LINK AT THE END OF EACH ITEM. (NOTE: THE TEXT OF THIS NOTICE WAS ALSO LIFTED FROM CORRIDORNEWS.BLOGSPOT.COM)
View all posts by Kim Triolo Feil →
This entry was posted in Uncategorized and tagged Aquifer, burleson, California, cityofarlington, contamination, draw down, drinking, drought, flooding, fracking, fracturing, ground water, irrigation, john kubala, lake arlington, mining, naturally, pesticides, pierce-birch, plant, poisoning, pumping, risk, river, thm, treatment, trihalomethane, trihalomethanes, trinity, tthm, Uncategorized, uranium, water. Bookmark the permalink.