Houston we have a FLINT problem BUT Arlington doesn’t 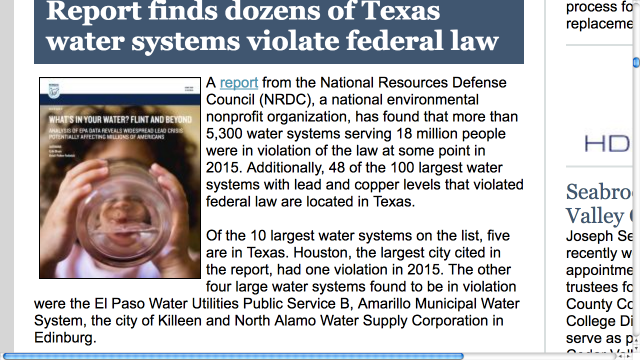 The Texas Commission on Environmental Quality (“TCEQ”) was requested by the City of Arlington, per United States Environmental Protection Agency (“USEPA”) lead and copper regulations, to move to reduced sampling because of our excellent record regarding lead and copper results as well as associated water quality results as they relate to corrosion control. This was granted and thus we are on the reduced sampling schedule of every three years.

We selected sampling sites prior to the initial lead and copper sampling, that met he USEPA criteria for assumed age of the plumbing materials based upon construction age of the home. We have used the same sites since the beginning of that testing to provide consistency in the testing process and to follow the sampling rules.

I would not be able to add your home to the list of testing sites unless the existing sites in your area are no longer able to be tested. I have included a list of certified laboratories that you might use to have your water tested for lead and copper although I am confident that Arlington’s water is providing protection from possible leaching from lead bearing internal plumbing fixtures and piping in your older home. I downloaded the list from a state site of accredited labs and it, unfortunately, does not have telephone numbers in the file.

You are correct that the USEPA sets the federal standards and states with primacy can set more rigid standards. But in either case, the USEPA standard or more stringent State standard is the standard that must be adhered to; in the former by all states or in the latter case, by only the State that has set the more stringent standard.. Regarding your comment that Arlington has the 4th worst drinking water as determined by the Environmental Working Group’s standards, but of which many are nothing more than goals, I would vigorously disagree with this assertion. Arlington meets and in many cases is much better than Texas and USEPA drinking water standards that are set after robust scientific research and standard setting procedures. To my point, we must adhere to Texas and USEPA standards, not a standard set by another jurisdiction, even if that standard is purported to be a “better” standard or a goal.

Instead of cherry-picking standards that Arlington, Texas is not bound by , if the Environmental Working Group would care to compare Arlington Texas’ adherence to USEPA standards, which are the safe drinking water standards set for the United States, I am sure we would be talking about a completely different ranking. Arlington, Texas would probably in the top ten of the largest cities in the United States. The Environment Working Group has also chosen to look at some California public health goals and not even enforceable standards or laws in California in all cases.

Drinking water standards are no different; they are generally very uniform across the country with some State exceptions unique to that state. The USEPA standards are set to provide a national standard that spans the enormity of the United States with vigorously scientifically researched standards to provide consistency and enforcement. If a primacy State wishes to enact standards that are more restrictive than the federal standards, they may do so, but it is understood that those standards are for that State only. Public Drinking Water Supplies are bound by enforceable standards, not goals.

How is it that TCEQ directed you to stop testing every six months and so now it is every three years?

You use the same 50 sites of 100 sites…one of the sites is/was? the UTA Student Lutheran Center…that is an old building, but MY home is almost 100 years old…I am officially requesting that you put my home put on the list.. But I don’t want to wait 3 years. If I get it tested myself who/how would I go about doing that?

The EPA is a starting point…the states and local gov can be more protective of public health and set more stringent standards….like California does.

On the City blog I asked them in the (pending comment)….

Please explain why Arlington has the 4th worst drinking water by Calif. safe from cancer standards in the top 200 largest cities in the US! https://barnettshalehell.wordpress.com/2018/03/18/arlington-tx-top-4-worst-tap-drinking-water-score-in-us/

The following is from the newly released 2014 EPA Toxic Release Inventory for the Arlington General Motors Plant.

Note this does NOT include the onsite Chesapeake drill site lift compressors & storage tank’s emission numbers.
GM’s Benzene was 1,351 lbs/yr in 2014. Over the last 14 years they averaged 1,129 lb/yr. The Benzene will only increase as the facility expands. This is not good for public health and how it blows to our Entertainment District and the Viridian development.
GM’s Toluene was 6,200 lb/yr in 2014. Over the last 27 years they averaged 21,000 lb/yr. They have greatly improved from the late eighties and first half of 1990’s. There was marked improvement starting in 1996 (the year my second son was born), but has started increasing again after the 2008 partial shutdown.
GM’s Xylene was 9,130 lb/yr in 2014. Over the last 27 years they averaged 252,000 lb/yr. Xylene is highly reactive for ozone formation. The Jacobson Effect says that urban airsheds should not have additional pollution loads. Urban airsheds create their own dome of trapped pollution by feeding off itself looping an exponential ozone/smog problem in the localized area. In 2000, it’s highest year, GM emitted 750,000 lbs/ yr. In 2013 GM’s Xylene was 115,000 lb/yr, and in 2012 it was 126,000 lb/yr. Why is it fluctuating like this? How can the state write a SIP if GM is all over the place on this highly reactive VOC? I hope council recalls my testimony asking not to approve those Chesapeake padsites on GM’s property because the airshed in that area was already was overloaded.
Dr Cynthia Simmons, please have GM provide a detailed plan in how their expansion will retire old polluting equipment. We need to know that the net effect will be less emissions…we deserve to know if the expansion brings expanded pollution or if it brings state of the art technologies reducing the load. I am extremely disappointed in city staff for not including emissions numbers when the expansions and tax incentives are voted on by council.I am saddened our Christian council doesn’t ask for this information either. You recklessly depend on the TCEQ-the wolf watching the (economic) hen house knowing the state of our air quality being in ozone NON-ATTAINMENT.
Last week at the NCTCOG, the TCEQ took public comments as a last ditch effect to improve their ozone State Implementation Plan (SIP) being submitted to the EPA (who could by law take it over a write a plan for them). The EPA was present to witness the hearing and heard folks complain that the TCEQ is basicly submitting a no-action-plan-against-big-hitters like the oil & gas industry. Yet again our state is submitting an already FAILED SIP that will likely not bring us into ozone attainment…so far this is a 20 plus year failure and our city council continues to ignore that we cannot come into ozone attainment. When council votes on gaswells and GM expansion projects, they do not take effluents added to the environment even as I have continued to remind them over the years (which is criminal in my opinion).
At the recent public hearing, I personally gave TCEQ/EPA info on: GM’s BTEX, the Jacobson effect, & Arlington’s TTHM tripling since urban drilling. Additionally I complained about how the lift compressors are not mandated under the PBR at our drill sites to be equipped with catalytic converters (updated home rule laws in our GW ordinance would fix this deficient in public protections).
It would have been good if Dr Simmons and council or even staff would have come to the TCEQ meeting to hear the heartbreaking testimonies of those who lost their loved ones to pulmonary disease or care for their sick children through the night who fall asleep in class at school the next day.
After the Flint lead problem, Michael Moore’s plea “So unhook the city from that source and let them drink the water known as ‘General Motors’ Sewer‘ – Flint River” has more eyes are looking this way…our way…at what our Arlington GM plant is discharging now….will you wait for some revelation catching you off guard?
GM’s water consumption is in the top five users for our city (In 2011 their water bill was approximately $700,000). Likewise GM is one of our top tax payers. However the residential taxes compose two thirds of our total ta dollars. WE pay the TRA at the CRWS in Grand Prairie to treat and release GM’s water to the Trinity River. What requirements are we as a home rule city imposing on GM’s TMDL to ensure we will not ever have that stigma of “GM sewer water” here in our Trinity River?
Mr. Gildersleeve, how can you assure us that GM is employing state of the art technologies to their waste water treatments? It has taken too long for them in my opinion to get around to retiring all their old air pollution mitigation devices.
Kim Feil

Since TX Statute 253.005 forbids drilling in heavily settled municipalities, I unsuccessfully ran for City Council Seat to try to enforce this. Since Urban Drilling, our drinking water has almost tripled for TTHM's. Before moving to Arlington in 1990, I lived in Norco’s “cancer alley”, a refinery town. It was only after Urban Drilling in Arlington did I start having health effects. After our drill site was established closest to my home, the chronic nosebleeds started. I know there are more canaries here in Arlington having reactions to our industrialized airshed (we have 55-60 padsites of gas wells). Come forward and report to me those having health issues especially if you live to the north/northwest of a drill site so I can map your health effects on this blog. My youtube account is KimFeilGood. FAIR USE NOTICE: THIS SITE MAY CONTAIN COPYRIGHTED MATERIAL THE USE OF WHICH HAS NOT ALWAYS BEEN SPECIFICALLY AUTHORIZED BY THE COPYRIGHT OWNER. MATERIAL FROM DIVERSE AND SOMETIMES TEMPORARY SOURCES IS BEING MADE AVAILABLE IN A PERMANENT UNIFIED MANNER, AS PART OF AN EFFORT TO ADVANCE UNDERSTANDING OF THE SOCIAL JUSTICE ISSUES ASSOCIATED WITH EMINENT DOMAIN AND THE PRIVATIZATION OF PUBLIC INFRASTRUCTURE (AMONG OTHER THINGS). IT IS BELIEVED THAT THIS IS A 'FAIR USE' OF THE INFORMATION AS ALLOWED UNDER SECTION 107 OF THE US COPYRIGHT LAW. IN ACCORDANCE WITH TITLE 17 USC SECTION 107, THE SITE IS MAINTAINED WITHOUT PROFIT FOR THOSE WHO ACCESS IT FOR RESEARCH AND EDUCATIONAL PURPOSES. FOR MORE INFORMATION, SEE: HTTP://WWW.LAW.CORNELL.EDU/ TO USE MATERIAL REPRODUCED ON THIS SITE FOR PURPOSES THAT GO BEYOND 'FAIR USE', PERMISSION IS REQUIRED FROM THE COPYRIGHT OWNER INDICATED WITH A NAME AND INTERNET LINK AT THE END OF EACH ITEM. (NOTE: THE TEXT OF THIS NOTICE WAS ALSO LIFTED FROM CORRIDORNEWS.BLOGSPOT.COM)
View all posts by Kim Triolo Feil →
This entry was posted in Uncategorized and tagged a, arlington, benzene, catalytic converters, chesapeake, cityofarlington, crisis, crws, cynthia simmons, dr simmons, effluents, entertainment district, epa, flint, General Motors, gildersleeve, GM, grand prairie, highly reactive, houston, Houston we have a lead problem, lead, lead problem, nctcog, nrdc, ozone, pollution, problem, river, sip, tax, TCEQ, tmdl, toluene, tra, TRI, trinity, trwd, Uncategorized, viridian, VOC, voc's, waste water treatment, wastewater, we have, xylene. Bookmark the permalink.