Posted on August 9, 2016 by Kim Triolo Feil
UPDATE trick ticket to hell as propaganda “Keep the Rangers” is all over the PAC’s signs, bill-boards, etc. …..without evidence that the Rangers WILL leave…..the video of mayor admitting they never said they would leave is HERE.

Last night was a media feast…here is WFAA’s coverage which mentions how the proponents far outnumbered the opponents, but here is evidence as to how/who some (most?) of these folks ended up at the meeting in the white tee shirts… 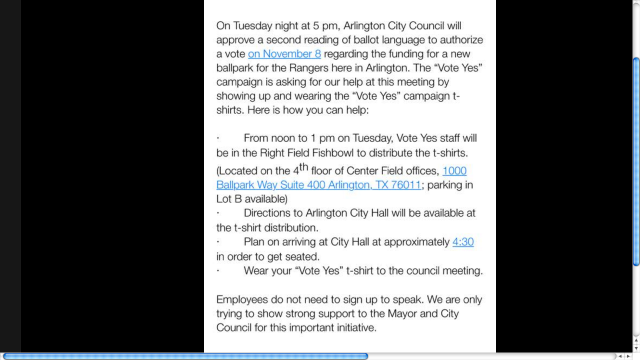 The Rangers and Arlington officials want our residents to foot HALF of a billion dollar baseball stadium with retractable roof, less seating and A/C….of course my biggest beef is at least one of the Ranger billionaire owners made his cash with fossil fuel interests (that worsen the very climate change that is making ever increasingly outdoor events unsustainable EVERYWHERE!)…#construction #workers #suffer TOO!

Dallas news update “Also, $2 million annual rent would help pay off the debt and eventually go toward stadium improvements when the bonds were retired. None of the Rangers rent would end up in the city’s general fund”.
Today council will be having the final vote (with public comment) at around 3:45 today to put the 50/50 deal on the November ballot to build a new Ranger Stadium BUT very good questions blogger Neil deMause and his correspondents have just HAVE to be answered!
Here is a cut and paste of the fieldofschemes blogsite…..

That tells us a lot more than we knew Friday morning, but there are still a bunch of unanswered questions:

Here is a letter I sent Professor Roger Noll, I’ll share his response. In the meantime please consider the questions on FIELDofSCHEMES.com
And also please read the last two comments for this article….
Pat on  May 25, 2016 at 2:52 pm  said:
There’s a rail system maybe 500 yards from the stadium if they want more revunue build an extension for the TRE that circles the stadiums and six flags. tax the mess out of the people who ride not the good citizens of Arlington
Rpdx1on  May 27, 2016 at 11:00 am  said:
Pat….they just may do that. Or bring in a private firm (like PDX did with Bectel to build the MAX extension) to construct a spur, the cost of which will be passed on to the public. That done by a ‘slight’ fare increase.
As for the roof…from those wonderful renderings, it looks like a collapsible cup type of design. Which is going to be all so wonderful, except for some possible sealing issues so the AC can work. Let alone the possible issues with the translucent glass in same being scratched (when it is opened and retracted), so it will look like a modern art masterpiece…but may cause the folks in Arlington to be on the hook for a replacement. Gee…the cost of that alone would be that for another ballpark….how about that!!!

Jerry Jones’ ATT Stadium would benefit from the Rangers/Cordish owned planned TexasLIVE complex  where the city of Arlington is pitching in $50million and other incentives worth about another $50million. Since the Rangers want air conditioning I have been suggesting that we work with Jerry Jones to use ATT Stadium during the hottest summer months. So my question is can a football stadium be retrofitted for baseball?
In using Oakland A’s & the Oakland Raiders as the example of two teams sharing the same coliseum, it is obvious that the Raiders ARE indeed no longer happy with this arrangement. Per the East Bay Times (TNS)
Fri, Jul 15, 2016 (10:30 a.m.)
“OAKLAND — City and county officials have asked for an appraisal of the jointly owned Coliseum site, as negotiations begin with a group headed by NFL Hall of Famer Ronnie Lott to build a new football stadium to keep the Raiders in Oakland”.
Last year there was the idea to build a new Oakland A’s baseball stadium nearby and have the old coliseum be updated for Raiders football games only. In this time of ever increasing hotter temperatures along with more sustainable activities, I believe in not throwing away good stuff such as the Rangers Globe life Park. I believe we should reuse, repurpose, renew, and extend the life of buildings unless they are unsustainable.
The Ranger’s open top stadium may be unsustainable to our hotter temperatures, and the costs of climate change by fossil fuel use that made at least one of the Ranger’s owners so filthy rich need to not look to Arlington citizens to pay that burden to have the games in air conditioning.
Thank you for your work that uncovers the UNeconomics of stadiums. I will send council this link to your article….
If you have any quick thoughts for me to give me our council? Otherwise, I will read some of these questions and ask council to table the vote until the questions are answered…. Rangers stadium to cost Arlington taxpayers at least $500m, many questions remain unanswered
In reading comments from residents on the Ranger proposals news coverage, they have ideas such as…

In my blog I post a video of the mayor of Arlington admitting the Rangers have NOT “said” they were leaving.

Since TX Statute 253.005 forbids drilling in heavily settled municipalities, I unsuccessfully ran for City Council Seat to try to enforce this. Since Urban Drilling, our drinking water has almost tripled for TTHM's. Before moving to Arlington in 1990, I lived in Norco’s “cancer alley”, a refinery town. It was only after Urban Drilling in Arlington did I start having health effects. After our drill site was established closest to my home, the chronic nosebleeds started. I know there are more canaries here in Arlington having reactions to our industrialized airshed (we have 55-60 padsites of gas wells). Come forward and report to me those having health issues especially if you live to the north/northwest of a drill site so I can map your health effects on this blog. My youtube account is KimFeilGood. FAIR USE NOTICE: THIS SITE MAY CONTAIN COPYRIGHTED MATERIAL THE USE OF WHICH HAS NOT ALWAYS BEEN SPECIFICALLY AUTHORIZED BY THE COPYRIGHT OWNER. MATERIAL FROM DIVERSE AND SOMETIMES TEMPORARY SOURCES IS BEING MADE AVAILABLE IN A PERMANENT UNIFIED MANNER, AS PART OF AN EFFORT TO ADVANCE UNDERSTANDING OF THE SOCIAL JUSTICE ISSUES ASSOCIATED WITH EMINENT DOMAIN AND THE PRIVATIZATION OF PUBLIC INFRASTRUCTURE (AMONG OTHER THINGS). IT IS BELIEVED THAT THIS IS A 'FAIR USE' OF THE INFORMATION AS ALLOWED UNDER SECTION 107 OF THE US COPYRIGHT LAW. IN ACCORDANCE WITH TITLE 17 USC SECTION 107, THE SITE IS MAINTAINED WITHOUT PROFIT FOR THOSE WHO ACCESS IT FOR RESEARCH AND EDUCATIONAL PURPOSES. FOR MORE INFORMATION, SEE: HTTP://WWW.LAW.CORNELL.EDU/ TO USE MATERIAL REPRODUCED ON THIS SITE FOR PURPOSES THAT GO BEYOND 'FAIR USE', PERMISSION IS REQUIRED FROM THE COPYRIGHT OWNER INDICATED WITH A NAME AND INTERNET LINK AT THE END OF EACH ITEM. (NOTE: THE TEXT OF THIS NOTICE WAS ALSO LIFTED FROM CORRIDORNEWS.BLOGSPOT.COM)
View all posts by Kim Triolo Feil →
This entry was posted in Uncategorized and tagged 50/50, 80/20, arlington, arlington rangers, ballot, baseball, bond, cityofarlington, deal, demause, employees, field, globe, globelife, Job, jobs, jones, life, Neil, noll, of, ranger, ranger employees, rangers, roger, schemes, table, Uncategorized, vote. Bookmark the permalink.